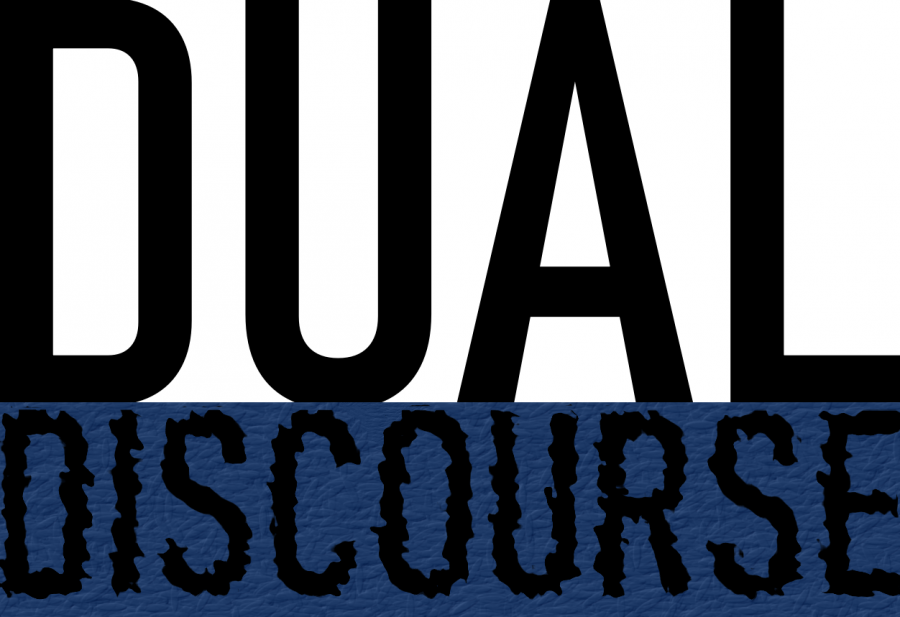 "Dual Discourse" is a column using the opinions of two staff members. This Week: UM and MSU Pre-Game Drama

The University of Michigan vs.  Michigan State University football game is one of the biggest rivalries in the Big 10 and in all of college football. This rivalry undoubtedly causes a great deal of emotionally driven actions throughout the game, even before it begins or after it ends. Along with the high intensity, there are many superstitions and traditions before each game, especially a big rivalry game.

Michigan State has a pre-game tradition of walking sideline-to-sideline, arms linked, from one end of the field to the other. However, they were supposed to do this march at about 9:50 am, but ended up missing the time by 15 minutes. When MSU did not walk the field, the Michigan players started to warm up at their scheduled time. The Michigan State players walked across the field, “clothes-lining” Michigan players including Devin Bush Jr. and his teammates, knocking one of the player’s headphones off, and triggering a word exchange. A few moments later, Bush got revenge by stomping, cleating, and ripping up the white paint on Michigan State’s logo in the midfield.

Many people feel that Bush should not have committed such an immature act of shredding up the midfield logo. Instead, Bush should have channeled all of his energy into the game and played exceptionally well as his revenge. These type of incidents make Bush and his teammates look bad and can upset the coaches. Had it not been so early in the day before the game and before the rest of the Michigan and the Michigan State players were warming up, there would most likely have been a huge altercation between both MSU and U of M players, ultimately leading to player ejections and suspensions.

It was a bit unreasonable for Bush to get so upset about Michigan State’s players walking arms in arm across the field. Ultimately, it was the home field for MSU, and they have rights to the field until the game starts. Michigan fans may believe Bush had the right to destroy part of the logo considering the actions of the the MSU team, but would Michigan State’s players act with this level of anger if the roles were reversed? Bush made a bad move and should be reprimanded by his coach.

So what exactly is the whole debate about the pregame antics at the rivalry game between the Spartans and the Wolverines?

The “big brother” and “little brother” terms have been used by both sides in regards to their football programs for years. The terms made both sides upset because of the disrespect coming from U of M towards MSU. Although, in recent years, The University of Michigan has not been very successful in the battle for the Paul Bunyan trophy. Jim Harbaugh is now 2-2 against the Spartans.

In the days leading up to the highly anticipated rivalry game, U of M and MSU fans were already trash talking the opposing side and on the Saturday of October 17th, State fans spray painted MSU over the symbolic Diag block M on The University of Michigan’s campus. As a result, the students of U of M expressed their anger and disgust toward MSU in Michigan’s local newspaper, the Michigan Daily.

I also think that what Michigan State did is immature and aggravating. All of this was done with the hopes of making the U of M fans upset, and it did. When the game approached on October 20th, things got more interesting. Before the game began, the MSU team walked in tradition across the field with arms crossed, as it normally does before every home game. The problem was, the team was late for its pregame routine, and some U of M players were already on the field warming up.

Why not get a slightly early start to the pregame warm-up? So as a few Michigan players were warming up, MSU players suddenly began their “ritual” on the field, giving no warning to the Michigan players and, essentially, roughing up the U of M players. Devin Bush Jr., one of the players that was knocked down, got up and tried to fight with the MSU players. Not long after leaving the field, Bush Jr. returned to tear apart the Spartan logo in the center of the field. Bush Jr.’s actions were not exactly necessary, but they were justified.

Proving that knocking the Michigan players to the ground was excessive and inappropriate, Michigan State University was fined $10,000 for the player’s unnecessary acts of immaturity.