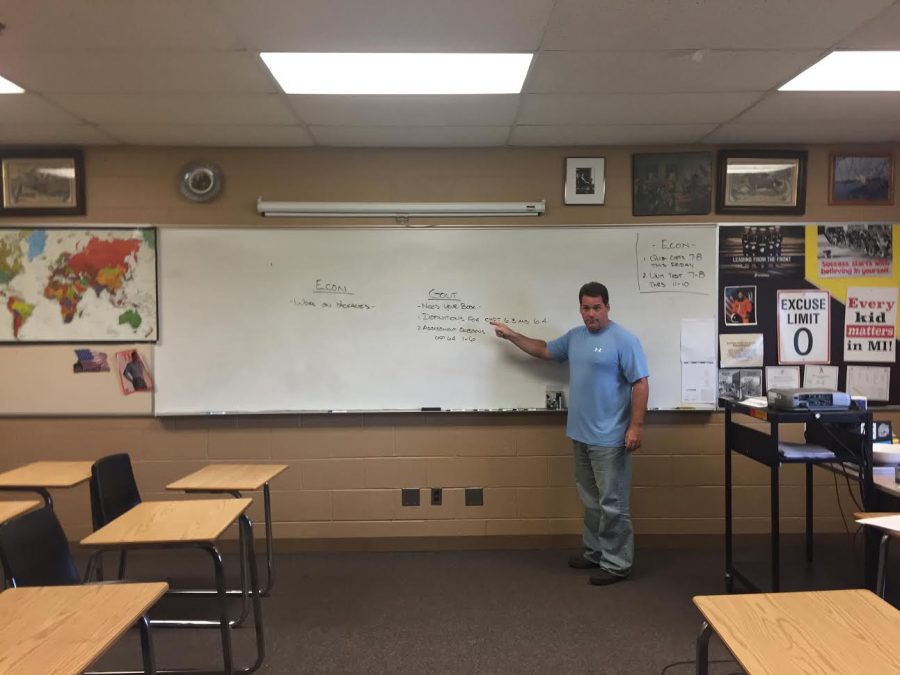 This year has been a groundbreaking year for the American campaign trail. Presidential elections always give students the chance to debate in the classroom on certain issues. Due to this year’s election, controversial topics have brought up by the candidates that the typical  student may not understand. Adams’ government teachers have been working hard to keep this election relevant to Adams’ students, a task which is not always easy. For this election, in particular, incorporating current issues with the everyday lesson plan may be more challenging than it initially seems.

Since this is an election year, getting student involvement in the classroom may be a little bit harder than usual. On a non-election year, it seems to be a little easier to talk about everyday topics such as college tuition and healthcare that may be discussed normally in a government class. Since 2016 has been the year of controversy, it has been more difficult to explain certain topics like the national debt and why certain candidates advocate some topics more frequently than others.

“I change the lesson plan to include about 40-50 percent more time devoted to the election. I feel it’s very important that the students have an understanding of what’s going on with the process that’s so important to our democracy. The topics I teach are the same, but we look at what the candidates are promoting,” said government and economics teacher Mr. Tim Mullins.

Some political topics might be difficult for students with limited knowledge regarding the issue to comprehend. Topics like immigration and border control can be confusing for average students who don’t keep up with everyday news. Adams government teachers always try to find ways to incorporate these topics into their lesson plans.

“Mr. MacFarland and I have changed the order that we teach our units so that we are starting our election unit right and now and it will lead right up to election day,” said AP Government teacher Mr. Jeff Hall. “We are able to show to parts of the debates, when they actually have anything to do with policy and issues. Anyone that has watched the debates, knows that has not happened much,”

This election, according to some U.S. history and government teachers, has been difficult to talk about in class. “Talking about this election has been difficult because the candidates are so polarizing and they cause such an emotional response from students. It is too bad that students and the public can only focus on the bad things about these two people, while some of the real issues get pushed aside or are misunderstood,” said U.S. history and government teacher Mr. Jack Beall.

Teachers always try to leave an impression on students which will insinuate further thinking about a topic outside of class. “Our job as teachers, and especially as government teachers, is to show students how important it is to become informed citizens that perform their civic right of voting,” said Beall. “More than 240 million people did not vote in the primaries for various reason. People can change the direction of the government, but it takes making phone calls and sending emails to your elected representatives at the local, state, and federal level as well as voting.”

Everyone has the right, and should know that if they are of voting age, to make a monumental difference in their country, no matter the circumstance. People tend to get discouraged in election years, believing that their voice does not matter when, in reality, it does. Voters can make a difference by voting in local elections that will affect the community in which they reside as well as in the presidential election that will shape the nation in which they live.

“As a teacher, I think it’s very important that the students walk away understanding their place in our system. That their vote and involvement do count and are important. They must feel like they are a part of the process so we don’t lose them as adults,” said Mr. Tim Mullins

Registering to vote is a  right that many Americans have but choose not to exercise. Voting is very crucial in coming elections and it is very important to register to vote.  Take the time to go on Rock The Vote, I Side With or On The Issues to learn about the candidates’ stances and how to register to vote. Michigan’s final day to register was October 11, but that does not mean it’s too late to register for local elections. Make sure to go to the polls November 8 at the assigned precinct.