Adams Student Section Looks to Move Up in State Rankings 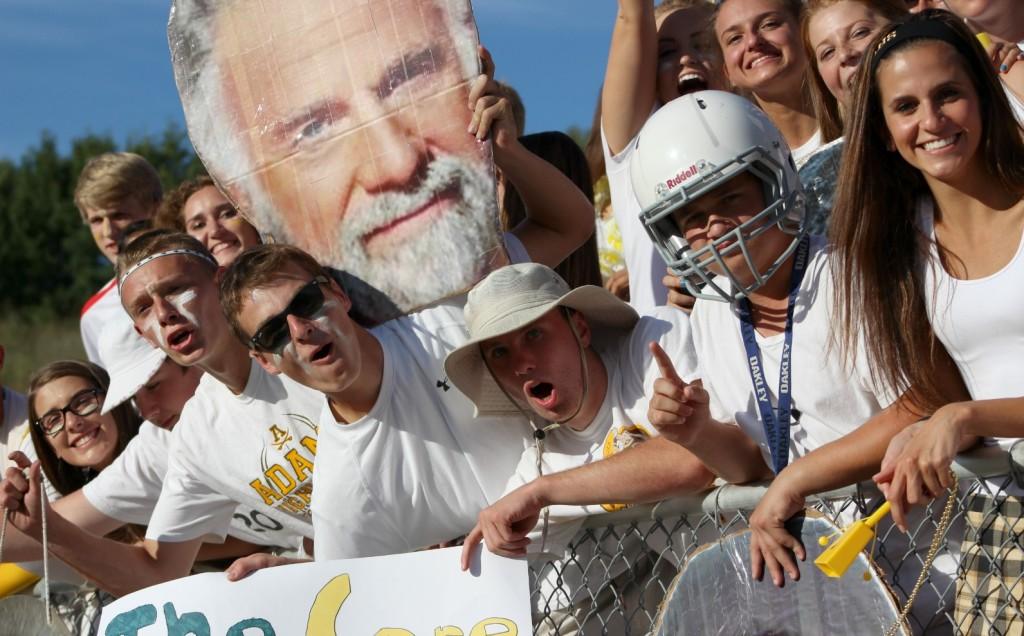 The AHS student section gets rowdy prior to a game against Stoney Creek.

After a disappointing start to the season, the Rochester Adams football team (0-2) looks to rebound with a win against Seaholm (1-1).

Every game has been a different clothing theme, and this game is no different. However, instead of the generic black-out or white-out, the student section has elected for something unique.

“This week’s game, the fans requested a ‘lumberjack out,’” said senior Ryan Gibbons. “We’re playing Seaholm, so I feel like the proper way to show up against the Maple Forest is lumberjacks. We’re going to chop them down.”

Many questions have been raised over the spirit of this year’s senior class, but the student section has found new ways to inspire Adams. Props and exuberance set it apart from the rest. Along with clothing themes for games, the Adams’ student section displays a multitude of giant heads, American flags, and theme-specific items like beach balls.

In order to communicate spirit ideas with the student body, the student section created a twitter account.

“Social media has been huge in stepping up our game,” said senior Nick Corsi.

The student section’s twitter (@WeRunTheRoc) has over 600 followers and has dedicated football coverage and student section updates. Run by Gibbons, Corsi, and four other student section leaders, the account tweets inspiration, themes for each game, and guidance for students in how to propel Adams up the student section rankings each week. However, it has not been able to surpass the Rowdy Red Zone of Chippewa Valley.

“Due to Chippewa’s student body size, they outnumber us,” said senior student section leader Devin J. Swiftney. “But they lack uniqueness and their chanting is weak. They have numbers, but they don’t have substance.”

To overtake Chippewa, the Adams student section hopes to take advantage of this week’s bonus points. For this week only, the rankings competition took a new twist, encouraging even more social media participation from schools.

“It’s called the tug of war,” said Gibbons. “What will happen is the student section account will tweet, and for every retweet we get one point, and for every favorite we lose a point.”

In efforts to increase participation among Highlanders, the student section will also be offering incentives for those who retweet but do not favorite their tweets.

“We want lots of retweets and not a lot of favorites,” said Gibbons. “The other student sections will be favoriting each other’s tweets; it’ll be an all out war.”

Highlanders who want to propel the Adams student section to the top should tag all photos and tweets from the game with #theDzone and #sss. Also, remember to retweet, not favorite, all official student section tweets!