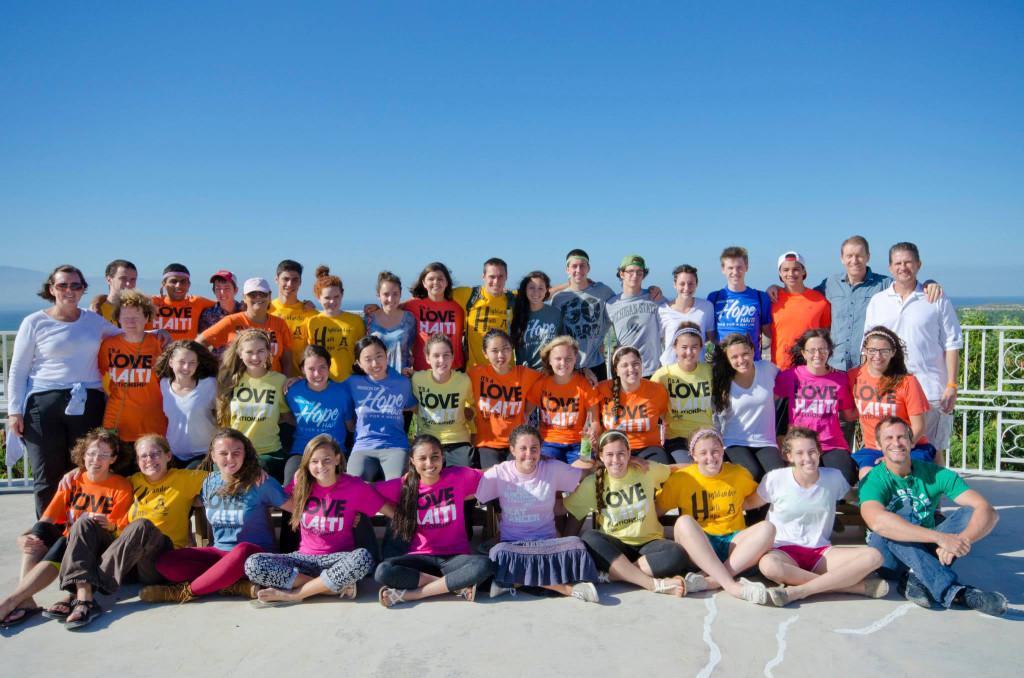 In the first of its kind from Rochester Adams High School, a group of 41 students, teachers, and parents went to Haiti on the trip of a lifetime. Over the course of Thanksgiving break, the group painted houses, travelled throughout villages, and viewed life from a completely different prospective.  They saw poverty and tragedy, courage and joy, and most of all, hope.

On November 23, the group left for Haiti. Adams raised enough money to build two houses and send two teachers, Ms. Boney and Ms. Holdsworth, on the trip. Additionally, Frau Barner and Mrs. Stebbe, 5 other adults, and 32 students decided to also participate in this outreach mission.

“When I found out the Teacher Rumble prize was for a trip to Haiti, I really wanted to win,” said Ms. Holdsworth. “I was so excited when I realized I could go. I was so appreciative of all the other teachers and students who helped me win the trip.”

The journey to Haiti started when Mission of Hope was chosen as one of two charities for Charity Week. Mission of Hope or MOH, was established in 1998 with the goal of bringing “life transformation to every man, woman, and child in Haiti.” MOH works to empower Haitians to lift themselves out of poverty through efforts such as education, orphanages, and nutrition programs.

The first impression Haiti gave the group was one of helplessness. Poverty was apparent in everything. Towns and villages composed completely of small tin huts, human waste lining the roads, and effects of the 2010 earthquake were just some of the sights the group saw during their time in Haiti.

“I never thought this experience would actually change me as a person,” said senior Melissa Mars. “But I now have a better perspective on life and am more appreciative for everything I have in Rochester after seeing what the Haitians live in.”

While in Haiti the group participated in a number of service projects and interacted with many of the locals. Translators helped break the language barrier and the group learned about the hopes of the Haitians. Many dream of going to school and one day having a skilled job like a doctor or a mechanic. Unfortunately for many this is only a dream, with university or even primary school being too expensive and unfeasible. In a country where school is not mandatory, only 20% of children reach secondary school. 90% of school’s are private and most require Haitians to pay to receive an education. A number of schools ask for sponsors to help subsidize costs, but many Haitians still cannot afford to receive an education.

All the children who attend MOH schools receive at least one nutritional meal a day, however, not all the children are this lucky. Malnutrition is common among children in Haiti and the results are heartbreaking. Their hair turns a fuzzy orange color, bellies become bloated from worms, and some children become little more than skin and bones.

“There was one child I remember who was severely malnourished,” said junior Maddie Walsh. “I went to pick him up and he was so light I almost dropped him. I could feel his ribs and spine while I carried him. But he was still so happy; he was singing and laughing the whole time. When I had to leave him I became very emotional because I realized I couldn’t feed him and take care of him.”

While poverty was prevalent, there was also joy. The group was amazed by the optimism children had in contrast with their situation. Those who can afford to go to school cherish it, and those who can’t hope to one day be able to go. Children crowded around work stations, jumping at the chance to be played with. The children loved posing for pictures, playing simple hand-clap games, or even just being given a piggy-back ride.

“The kids really don’t have much but the happiness they got from playing with us… it was visible on their faces and it overwhelmed me,” said junior Ashish Tripathi.

“I went there thinking we were going to help them and physically I think we did,” said junior Jillian Rogers. “But I felt spiritually the children taught me so much about appreciating my life and living every single day to the fullest.”

Beyond just the children, the strength of the Haitian people as a whole impacted the Adams team. Haiti is the poorest country in the Western Hemisphere and many of its adults are illiterate or have little to no formal schooling. 80% of the Haitian population lives in abject poverty. Economic chances are bleak, but most Haitians have not lost hope.

“It’s inspiring to see how much strength they have even though they come from a country that’s filled with poverty,” said junior Paige Huszarik.

Now back from Haiti, the group is hoping to spread the lessons they learned in Haiti to the rest of Adams. They hope to not only appreciate what they have but to continue to serve the community and the world. Student’s have already organized a bake sale to send money for a kid’s program through MOH and are looking to do more. There are even talks about organizing another trip and expanding the number of people able to take part.

“It went really well and I think a lot more people will want to come after hearing the stories,” said freshman Grace Lee. “I think Adams will have to have another outreach mission.”

Those who went to Haiti all have a different story to tell. While the impact Haiti and the Haitian people had on them were universal, different parts of the trip stick out. Some said it was the Haitian children and the joy they exuded, but for many others it was simply the bonds they made with other students on the trip.

I think the best part of the trip was interacting with the people I didn’t know too well before and getting to know everyone. We all got so close,” said senior Caleb Lee.

Haiti will continue to impact those who went for the rest of their lives. It was a place of contrasts, with poverty and happiness coming hand in hand. It was a place where hope existed where it was least expected. Haiti is still in dire need of help, but the future is not as bleak as it seems. Organizations like MOH are tirelessly working to increase standards of living and volunteers such as the group Adams sent are slowly making a change.

“Hopefully this trip can continue in the future,” said Lee, “but for now we just have to do as much to help as we can here.”