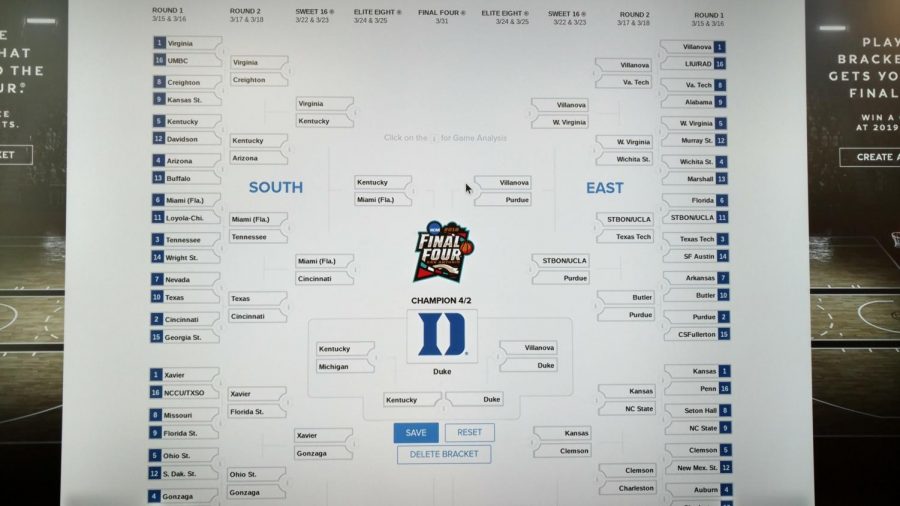 The Adams Kilt Bracket. to see the full bracket go to our twitter @theadamskilt.

During the NCAA (National Collegiate Athletic Association) basketball tournament, AKA March Madness, people wonder if it is possible to get a perfect bracket.

Statistically speaking, the odds of creative a perfect bracket are about one in 9.2 quintillion. This means that you have a better chance of getting struck by lightning twice or winning the lottery than to fill out a perfect bracket.

Even though the odds are heavily stacked against them, those who fill out brackets for March Madness are determined to beat the odds. People will still fill out hundreds of brackets hoping one will be perfect. Some large organizations and competitions, such as the “Warren Buffet Million Dollar Bracket Challenge”, will give out millions of dollars to the person who can successfully fill out a perfect bracket. The only question is, why are people so adamant about beating these impossible odds of filling out a perfect bracket?

“When making my picks for my bracket, I mostly make largely uneducated guesses and pick my favorite teams, but I don’t always pick the higher seed; only going off if I have a hunch or not,” said junior Chris Hebert.

Due to the unpredictability of each game, the odds of getting everything right on your bracket are low in March Madness. Even when the best team plays the worst team, there is a chance that the higher rated will lose. This factor plays a significant role when trying to make a bracket that is near perfection. The unpredictability with how each team will show up and perform makes choosing the winner of each game nearly impossible.

“When picking teams, I go off of gut feeling, and I follow college basketball and know how each team is playing, so that also goes into how I choose each team to win,” said senior Noah Crusoe.

A lot of people who care deeply about their bracket will try to break it down to a science, and pick winners for games based on statistics from the regular season. While this may seem like a smart way to go about things in the tournament, nothing is for certain. A player could play like a NBA player during the regular season, but then choke when it gets to March Madness. Taking this into account, players get injured all the time and are unable to play. This messes up a lower team’s stats, making them look bad and not much of a threat in the tournament.

The idea of filling out a bracket still appeals to many people even though its difficult to predict everything, the idea of competing against other brackets and rooting for upsets is always a fun thing for many people.