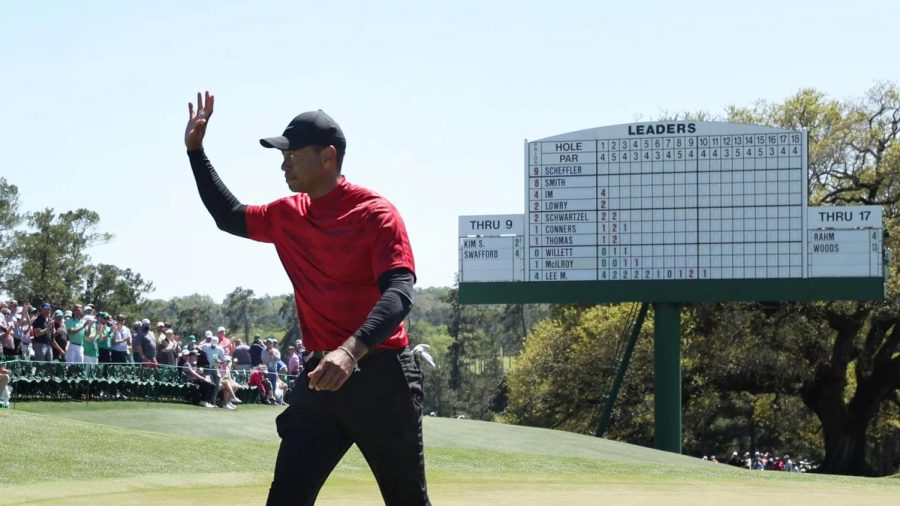 Tiger Woods thanks the crowd after his final putt on the 18th hole on Sunday at The Masters.

The 2022 Masters was held at the Augusta National Golf Club in Augusta, GA over the weekend of April 7th-10th. Although there was not much movement at the top of the leaderboard for most of the weekend, it certainly did not fall short on eye-catching storylines from the top golfers in the world.

It seemed improbable that Tiger Woods would be playing in The Masters just over a year after a brutal car accident that left him with multiple breaks in his leg. The disputed G.O.A.T. of golf defied the odds and played at Augusta, having a strong first round on Thursday and finishing in fifth place on the leaderboard at -1. Friday was a slight setback, as he finished at two over on the day and +1 for the tournament. He was able to make the cut and was gaining a lot of attention from his fans and the media for the miracle he was performing on the course.

The final two rounds were not as good to him, as Woods finished the Masters with a final score of 13 over. Although he finished a little rough, Woods still had a large smile on his face as he walked off the course with patrons applauding and cheering appreciatively for his unthinkable four rounds of golf.

“It’s been a tough road and one that I’m very thankful to have the opportunity to be able to grind through it. A lot of different things could have happened, but 14 months [after my car accident], I’m able to tee it up and play in the Masters,” said Woods after finishing his final round.

The golfer that emerged strong and stole the show at Augusta was 25-year-old, Scottie Scheffler. Scheffler recently became the world’s #1 golfer, and he proved that ranking was accurate as he came out strong in the first round, finishing tied for third at -3. He would then take the lead on Friday and would refuse to give it up the rest of the weekend. Scheffler had a powerful second round, shooting 5-under par and finishing with a total of -8 and a five-stroke lead. He wouldn’t face any other challengers until the final round on Sunday.

Scheffler entered the final round with a score of -9, leading his playing partner, Cameron Smith, who came into the day at -6. Scheffler struggled early, parring on holes one and two, while Smith cut Scheffler’s lead to one stroke after two birdies. However, the tide turned on hole three as Scheffler and Smith found themselves facing nearly identical chips from just off the green. Scheffler hit a seemingly impossible shot that blew up the crowd and fueled him with momentum. Smith struggled to find the hole and gave Scheffler back the three-stroke lead, never again finding a way to contest him.

A long shot on the final Sunday was Rory McIlroy, who had an incredible final round, shooting -8 on Sunday. He finished the tournament at seven-under and seemed to be putting some pressure on Scheffler. Unfortunately, McIlroy came up just a bit short, as Scheffler took home the green jacket with a final score of -10. Scheffler shared a long embrace with his wife after his final putt on the 18th hole, surrounded by a shower of cheers.

“I think I stayed patient and trusted myself. I had a lot of nice ups and downs too,” said Scheffler after his big win on Sunday.

Scheffler plans to carry this momentum throughout the rest of the year, hoping to prove why he deserves to be named the number one golfer in the world. Scheffler’s victory was only the sixth time the world’s number one ranked golfer has won The Masters, Woods being the only one to do it twice, in 2001 and 2002.