The Dismal State of Detroit Sports 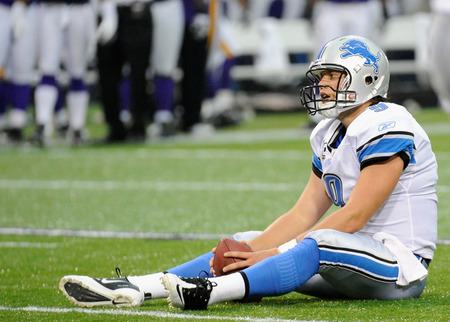 Quarterback Matthew Stafford suffered a season ending back injury this year. They have not won a game since.

Detroit sports teams have a collective 67-159-4 record this year. Clearly, there is room for improvement

Though the city of Detroit appears to be making a comeback, the city’s sports teams are collectively in the worst condition of its history. The city has a long past of success on the national level, and with a combined total of 18 national titles (11 NHL Stanley Cups, 4 MLB Commissioner’s Trophies, and 3 NBA Larry O’Brien Trophies) throughout the city’s professional sports history, Detroit is no stranger to dominance in professional sports. Detroit’s fall from grace has been catastrophic, but there are some potential solutions to each team’s woes.

Detroit’s last national championship was the Red Wings’ Stanley Cup win against rival Pittsburgh Penguins in 2008. The Wings dominated in the NHL Western Conference for decades and had the longest playoff streak with 25 consecutive playoff appearances. In that time, the Wings nabbed four Stanley cups in 1997, 1998, 2002, and 2008. The Wings’ decline began with the retirement of multiple superstar athletes like Chris Chelios, Nicholas Lindstrom, and the entirety of the famous Russian Five. In the 2016-17 season, the playoff streak ended, and it has been downhill ever since.

The Red Wings seemed to be moving towards another underwhelming season when they made a major offseason acquisition. The Wings signed former captain Steve Yzerman to the position of General Manager after he led the Tampa Bay Lightning to multiple playoff berths in his eight seasons with them. A glimmer of hope shined through with the return of this hometown hero. Yzerman seemed to have made meaningful changes when the Wings started this season at 3-1. However, the team’s performance began to deteriorate again with the loss of key players like Mantha (C), Dekeyser (RW), and starting goalie Howard. Currently, the Red Wings have the worst record in the league and a minus-50 goal differential. A sad state of affairs for this organization.

Another Detroit team that is no stranger to poor performance is the Detroit Lions. Despite the disappointing reputation of the franchise, some analysts predicted them to be a dark horse for the NFL playoffs this season, and fans expected head coach Matt Patricia to build on the 6-10 record of the previous season. The team returned healthy with weapons like QB Matt Stafford, RB Kerryon Johnson, WR Kenny Golladay, and a new addition to the arsenal: eighth overall draft pick TE T.J. Hockenson. Early on, hopes seemed to be validated as the Lions went undefeated until a close loss against red-hot Kansas City Chiefs 34-30. Since then (9/29), they have won only a single game against the 2-6 NY Giants. Many fans have lost hope in the embarrassing defense – something that Patricia championed with his time with the NE Patriots – and expect them to tank (purposely lose) for a chance at Ohio State’s DE Chase Young.

The Lions are not the only under performing cat in Detroit. The Tigers finished last season with an abysmal 47-114 record; the absolute worst record in Major League Baseball. Adams sophomore Tadan Buck said it best when describing the Tigers past season; “They were supposed to be bad, but they turned out to be even worse than expected.” He then added “like all Detroit teams.”

The rapidity of their downfall is astounding when considering the fact that they were in the World Series only seven years ago. Having the first overall draft pick will help with their much needed rebuild.

Finally, the last of the failing Detroit teams appears to have the most potential. The Pistons had a successful season last year and even made the playoffs. They were swept by the Miluwakee Bucks in the first round, but they still seemed promising. However, this season they have begun below average at a 9-14 record, so I decided to ask life-long Pistons fan and Adams Senior, Zack Gross, about his take on the pistons season so far.

“Slow and disappointing start. I expected them to start off hot with picking up Derrick Rose and having Andre (Drummond) and Blake Griffin come back, but it’s been a pretty slow season.” When asked if they would make the playoffs, “At this rate, no”; he finished with the statement, “I think it might be time for a rebuild.”

With the appalling records of these teams, high draft picks are on the horizon along with the hope that future teams will be stronger. This historic, city-wide sports rebuild coincides with the resurgence of the city of Detroit. One thing about the city and its team remains in common: They have a lot of work to do.