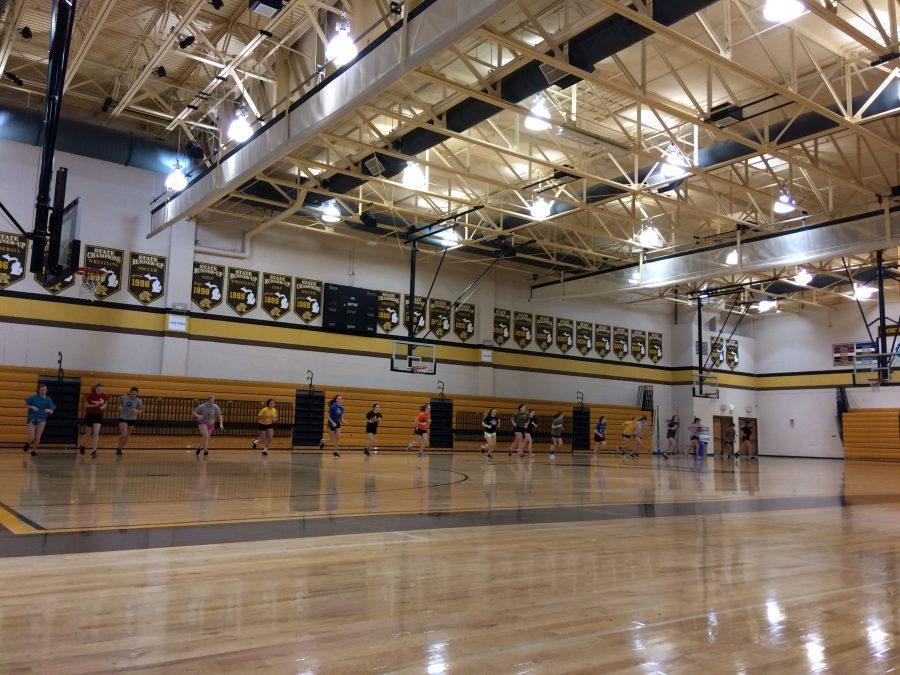 The Varsity Girls Soccer Teams conditions for the upcoming season.

Spring is just around the corner, and for some students at Adams High School that means the beginning of training for spring sports. While spring may seem far away, dedicated athletes are not deterred from preparing for their upcoming seasons. The spring sports students are training for include, baseball, softball, lacrosse, women’s soccer, and women’s tennis.

While these teams are looking forward to the upcoming season, they are also reflecting on the past, in the hopes of beating their records from last year.

The baseball team won the OAA Red Division for the second year in a row last year and is looking to make it three years straight this upcoming season. They also took home the district title and will be striving for regionals in the spring.

The boy’s golf team advanced to the state finals last year and finished 13th. With such an amazing season last year, the team is going to have to train even harder in order to bypass their previous state title.

While the boys and girls track teams will be striving for an extraordinary record in their meets this upcoming season, these individuals will be working to run down their times from last year in order to place even better this year at States.

“The guys’ side lost a great number of sprinters last year, but I think we can make up for them. I think the girls are going to be as strong or even stronger than last year. For myself, I’m hoping to reach my goal of placing first at states in the 3200,” said senior Matt Schram.

The boys lacrosse team will be hungry for the regional title this year. Last year, they fell just short in the regional semifinals and are hoping to make it to the finals this year, and possibly even make it in the running for states.

This upcoming spring, many teams are working to raise the bar. Girls’ lacrosse began conditioning, giving this season everything they have right from the start in the hopes of achieving a winning record, and possibly a league or district title this season.

Girls tennis is hoping to have a strong season with a handful of strong returning players, including senior Erika VonBehren and junior Dania Jaamour as singles, and juniors Kate Roberts and Caroline Pittel as doubles.

“I’m looking forward to this upcoming season, I think we can do well as a team and I’m hoping to improve as an individual as well,” said senior Erika VonBehren.

Hoping to to hit a homerun this season and not strike out, the girls softball team will be working hard this spring to reach their potential as a team. They hope to achieve a winning record and make it far in the state tournament.

As spring sports start to gear up, it’s beginning to look like there will be strong competition across the board from all teams. All are working to do their best and go as far as they can this season. Stay on the lookout for these hardworking and determined teams as the spring season begins to unravel.