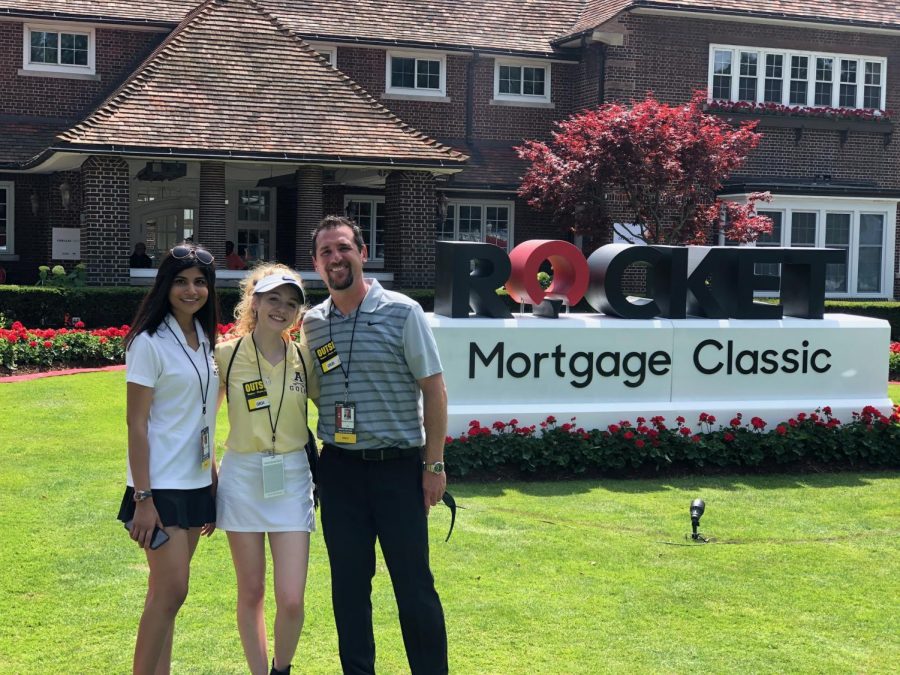 Adams Kilt journalists Josie Wenzell and Kristen D’Souza recently covered the inaugural Rocket Mortgage Classic, the first PGA tour to come to Detroit. The student journalists traveled to the grounds of the historic Detroit Golf Club on the final day of the tournament, Sunday June 30th, to document the closing of the Rocket Mortgage Classic, as well as hopefully the beginnings of a professional golf presence in the Motor City. Wenzell and D’Souza were given media credentials that gave them a unique, behind-the-scenes experience.

We started the day off in the parking lot designated for media personnel and caddies. The tournament took place on the grounds of the Detroit Golf Club, a historic two-course venue established in 1899. Prior to the Rocket Mortgage Classic, the club combined two 18-hole courses as tournament grounds.

Upon arriving on club grounds, we made our way to the PGA’s media tent, where tables were set up for the various outlets covering the tournament. In the tent, we received our media credentials; passes that would allow access to various restricted areas around the grounds.

In addition to receiving media credentials, we obtained photo passes that would allow us to take photos of the rounds from outside the ropes. In this very same media tent, the tournament’s final, jam-packed press conference with champion Nate Lashley would take place in the evening.

We began by following Brian Stuard, a Jackson, Michigan native as well as a front-runner in the field, and Korean player Sungjae Im for the first five holes.

One of the exciting aspects of a PGA tour arriving locally is the opportunity to see professional and international golfers up close. Around the ropes sectioning off crowds from the green, there was a quiet thrill–world class players were just feet away. For amateur players and avid fans in the Michigan area, the tournament was a chance to watch the professionals at work.

The fan zone, built on top of what was normally a fairway, attracted attendees who had strayed away from the live play to eat food or shop tournament-exclusive merchandise. Near the back of the area, many lined up for the Rocket Mortgage “Shot for Heroes” challenge, in which fans could try their hand at swinging a club–for every hole-in-one, $3000 would be donated to Built For Zero, a foundation striving to help homeless veterans; $25 would be donated for every person who simply participated in the challenge. The challenge for charity was popular with attendees–the commemorative coins that were first being handed out to participants at the beginning of the week had run out the end of the tournament.

As journalists for The Kilt, we then spent time in the “quick quotes area” where players would meet with journalists for interviews. We were able to interview golfer, Aaron Wise, after his final round. The 23 year old Wise was named 2018 PGA Rookie of the Year and netted his inaugural win in the 2018 AT&T Byron-Nelson.

“This course was playing kind of easy for us, and I knew I was going to have to shave off (a good number) if I was going to make it up the leaderboard…I wasn’t able to do that,” noted Wise, speaking on his goals for Sunday’s performance. He added that he was “happy about that finish,” referring to the last two holes of the course.

“It’s a great course and a great tournament, and I think it’s only going to grow from here,” said Wise, when asked about the Rocket Mortgage Classic’s inaugural year.

The close of Sunday’s rounds marked the end of Detroit’s first PGA event, but perhaps also the beginning of professional golf in the city.