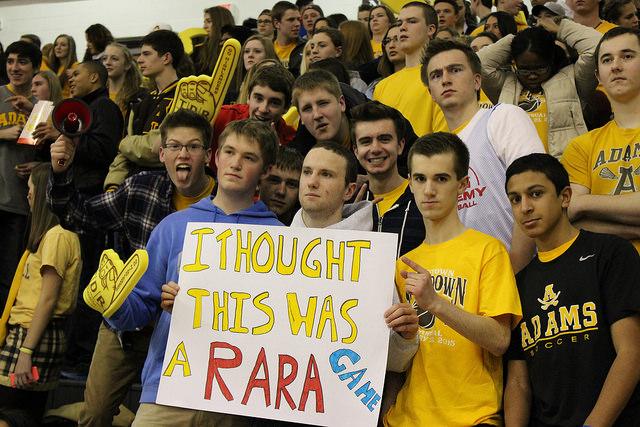 RARA fans hold up a sign promoting RARA during the Crosstown Showdown.

The RARA basketball season continues into its second week of games, with each game changing the rankings as the teams continue their battle to the top and work towards eventual playoffs at The Palace.

Multiple games took place at Adams High School on January 24, including intense games between The White Mambas and Roc Thunder, Dane’s Mom and Rib City Blazers, and The Lob City Supersonics and the -76ers.

“Our team lost but we almost came back, we lost by three, we were down 20-4 and we made a pretty valiant effort to come back. We should have come back and gotten the win. I had 13 points which was awesome. We’re hopeful for this weekend. I think we can beat the Detroit Swish but it’s going to be a tough game,” said senior Zach Raad, who plays for The White Mambas.

Even with some losses, the teams keep their heads up with positive energy.

“Sadly, we lost this Saturday. Rib City won their last game by 76 points and they only beat us by 18, so I’ll take that. My favorite part was when Jared made a three-pointer. We were still losing but for some reason he got on his knees and started celebrating in the middle of the court. We are looking forward to this weekend and playing Lob City and moving up in the rankings. No days off; we practice every day,” said Senior Edwin Purcell, who plays for Dane’s Mom.

The Lob City Supersonics beat the -76ers, and after a tough loss last week, they were happy with the win.

“We needed the victory on Saturday and got the job done. We are still fine-tuning our offensive and defensive sets. I applaud the -76ers, it’s always a fun time going up against them. We have a big game next week and have to prepare for another battle. Just another day on the marathon known as the road to the Palace,” said senior Ryan Gibbons, who plays for the Lob City Supersonics.

The teams continue to improve each week and look forward to the rest of the season.