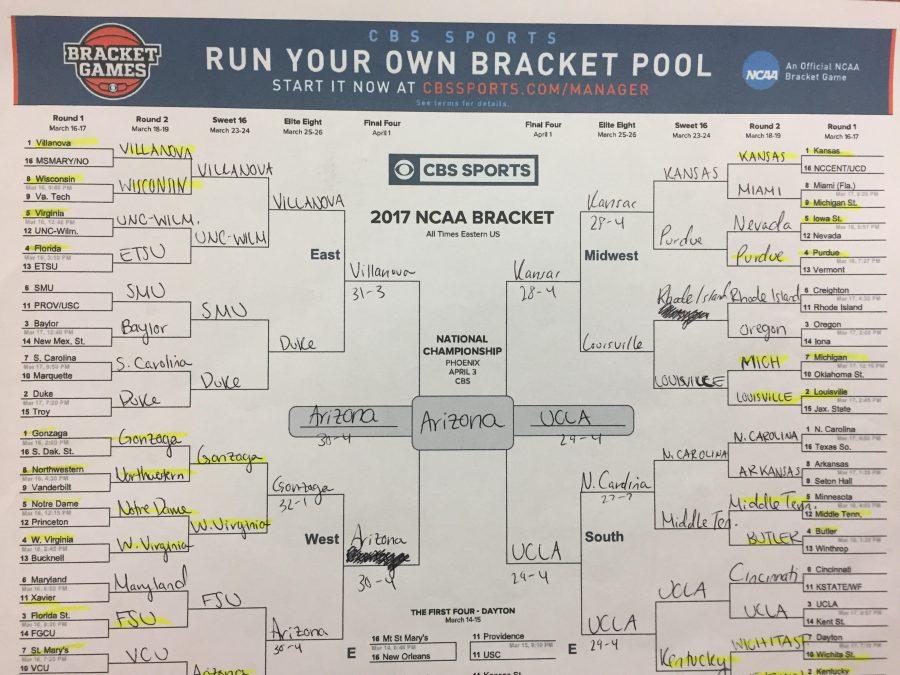 Many people make their own March Madness brackets to join in on the fun.

Michigan is not the only thing heating up during the month of March ; sports fans have started making bets on their golden brackets in a little thing called March Madness.

The 2017 division one tournament started Tuesday, March 14, giving fans and teams just enough time to prepare themselves for the tournament. Now, midway through the tournament, people are either doing really well or …not.

Preparation starts by choosing which teams are favored to win and choosing the perfect bracket. Some do this by picking their favorite teams, but others take a more strategic approach, making educated guesses based off team statistics from the year.

A great deal is put on the line during March, including money and personal ego. What starts off as a friendly competition against peers turns into a near bloodbath with everyone trying to win the fight over whose bracket is better.

Making big bets on brackets can be risky. Last year only 1.26 percent of all people who made brackets actually had the final four correct. That is what makes this tournament such a great one to watch; it is such an unpredictable competition that it makes it nearly impossible to make a perfect bracket.

Most people are involved in March Madness in some way, shape or form, whether they watch basketball the rest of the year or not. Fans make brackets and groups which compete against each other in a friendly competition. Whoever makes the best bracket normally wins the prize money for that bracket.

“I don’t usually watch basketball; this is about the only time I do, and I always make a bracket,” said  senior Jake Golding. Fans do not have to be avid basketball spectators to have fun with their friends and watch all the games.

“My favorite team is Michigan State because I’m a born Sparty fan, or Gonzaga, because I like the name,” said Golding.

Whether a fan does research on a team or picks a team simply because the team has a cool name, everyone has the same shot at making the perfect bracket.

“My favorite part about it is how anything can happen,” said senior Ross Wotring.

Another major component of March Madness is the team seeding. Every year top seeds are picked for each region based off the team’s performance that season. The higher seeded team plays the lower seeded team,  giving them a better chance of winning. Some teams who have a shot at getting the number one seed are Villanova, Kansas, Baylor, and Gonzaga. Although the higher seeded teams are not guaranteed to go far, seeding is definitely something to take into account while making a bracket.

The month of March is huge for both people who watch basketball, and also for people who just want to have fun with friends while making brackets. Whether someone knows a lot about college basketball or not, everyone has the same chance of creating a perfect bracket due to how unpredictable the NCAA tournament is.