Cheering Their Way to the Top 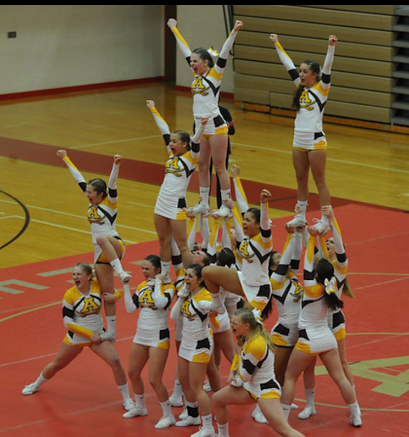 The Adams Cheer performing a round in the Regional Competition.

The Rochester Adams varsity girls cheer team has been creating noise worth noticing. The goal for Adams this season is to walk away with nothing less than a state title. Currently ranked in the top five in the state, these girls have exactly what it takes to bring home the hardware.

In recent news, on February 18, the girls competed at the district competition, hosted by Troy Athens. With 13 teams in the draw, the girls needed to finish in the top four in order to move on to regionals. When all scores were tallied up, Adams finished in second place, clinching another trip to regionals. Along with Adams came Stoney Creek and Rochester, giving all three schools in the district a regional berth.

On February 25, the regional competition took place at Troy Athens High School. The girls came out strong; the first and second rounds put them in second place out of 13 teams. All eyes were on Adams, as they were the first team to do their cheer in round three. The cheer was nothing short of perfection, making it clearly known that the Highlanders would make it to states.

“Regionals was my favorite competition of the season and I’ve never been more proud of my team,” said senior Amanda Warner. “After every round, we came off the mat crying of happiness, and I will never forget the feeling. I’m super excited to compete at States with my team, and it’s a great way to end my cheer career.”

The Adams girls will be one of eight teams competing on Friday, March 3 in Grand Rapids. Come out and watch the girls finish their season on top at States!

“Being the first Adams cheer team to advance to the state competition is great, but we are looking for much more that,” said junior Natalie Keaser. “We want to leave Grand Rapids with a state title.”