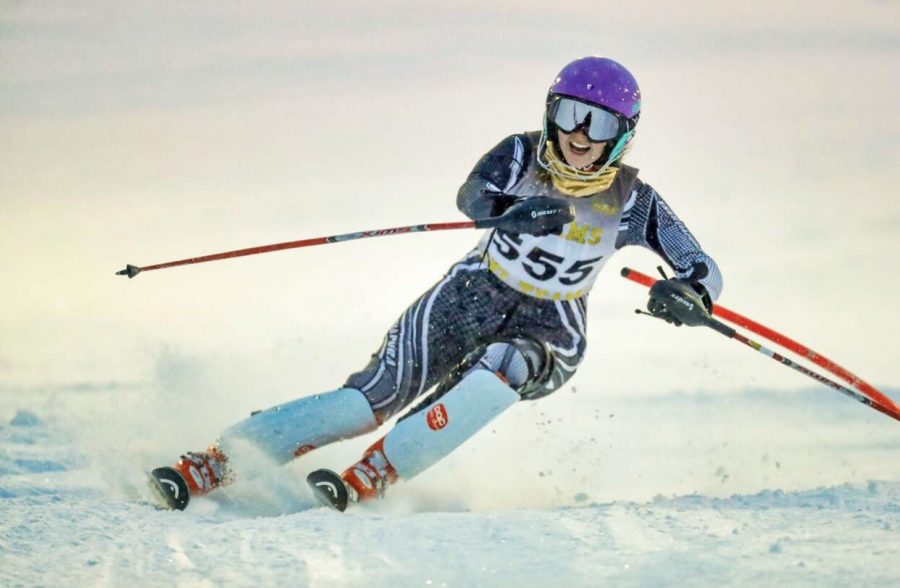 Amelia Buckmaster at pine knob racing down the course.

This year the Rochester Adams ski team is one of the most underrated sports teams around. While sports like football and basketball are the top priorities of most sports fans, the ski team hides in the shadows unseen by a majority of the student body. However, both the girls and boys ski teams moved mountains at their regional meet with both teams coming in first place, adding yet another award to Adams trophy case. This win will put them in a great spot for State Championships, meaning they have a better chance at being state champions than they believed.

This was not a huge surprise for the ski team as it was their goal from the start of the season to become state champs. Last year the Adams team received third place, but now is the time for redemption.

“I was excited to qualify for states again, and I am ready to see what we can do in states after coming in third last year,” said sophomore Colin Dehart.

The team is ready to get after it this year after their hard-to-swallow loss in states the previous year. There are a few new front runners representing Adams for both the boys and the girls teams, consisting of more than a few underclassmen. For the boys: sophomore William Blackmer, freshman Zeke King, senior Matthew Wells, sophomore Colin Dehart, junior Eli King, and senior Parker Morris. The boys team is definitely not one to mess around with, with three out of the five students landing in the top ten at regionals. The girls had a rock solid start to states as well with sophomore Kaylee Richardson leading the fight for state champs, coming in second place in the regional race. But not to worry, the rest of the team is right behind her with junior Olivia Guzzardo, junior Claire Dunselman, senior Amelia Buckmaster, junior Jacqui Murphy, and senior Molly Day. After the results of the race were announced at Pine Knob to all the teams, Rochester Adams was among the top teams at regionals with both the girls and boys teams having won the regional meet.

“I was very excited after I heard the results; I am very proud of my team and my coaches for pushing us this far. We’re ready to send it at states,” said senior Matthew Wells.

Both ski teams have states coming up. This is not the first time and will not be the last. After states we will know if our southern Michigan skiers can compete with the Yoopers from Up North.