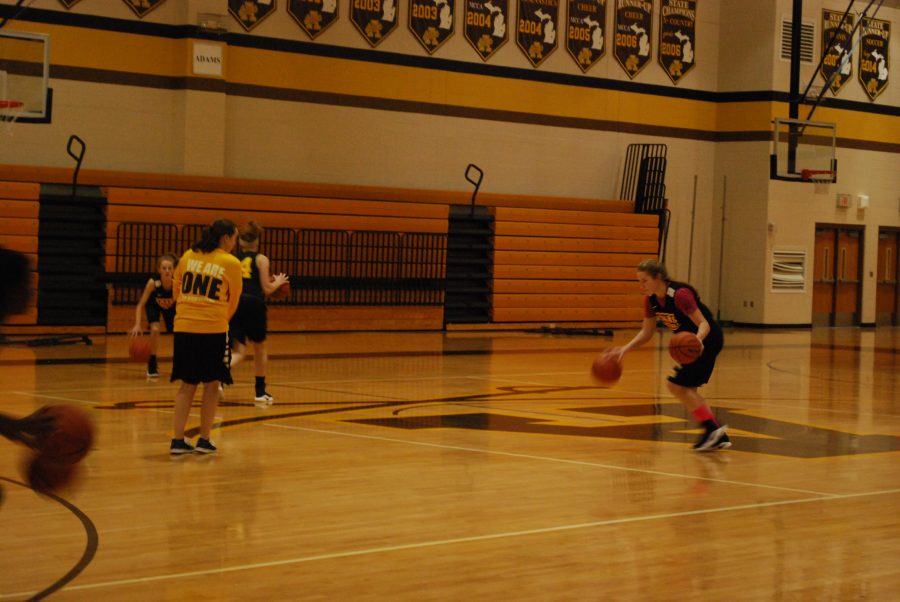 It’s the time of the year again, when the weather gets brisk and we transition to a new season of sports. The Adams’ girls varsity basketball team is gearing up for the start of their new season, with a new coach at the helm.

Recently, their previous coach, Shay Lewis, left the Adams’ team after receiving an offer for a position at Oakland University as the Women’s Basketball Director of Operations. Lewis was a part of the girls basketball program at Adams for just two years, but she made a big impact on the girls she coached in her short time here.

The team was sad to see her leave, but knew it was for the best. They know she has a great future ahead of her in the world of basketball. Jackie Steinacker, former assistant coach of the team, stepped up to fill the head position. With only a few practices and scrimmages under their belts, the transition of coaches has been smooth so far for the team.

“The team is adjusting well to the new coaching staff, because we are all close already due to her being assistant coach last year. We run a lot of the same plays, and practices are run in a very similar structure as those of last year,” said senior Captain Ryian Owusu.

It seems that the girls’ focus and dedication has not been affected by the coaching change thus far. This transition of coaches will truly be put to the test at the first game of the season on December 9 against Lake Orion. As for the team’s future, who has previously come very close to a district title, fans are wondering how this season will measure up to the past.

“I see us winning a district championship this year. We know we can do it because we have been so close the past couple years, and we know what it takes to get to that point,” said senior Captain Maggie Rogers.

There is still considerable time before playoffs, meaning that the girls have many practices to prepare themselves for the first game of districts. Last year’s season began with a losing streak, but with blood, sweat, and tears, they were able to pick themselves up and continue on with their season.

Unfortunately, it was not enough to claim the district title; they lost in the second round in their game against Utica. This year, they hope to learn from their mistakes and come into the season with more focus and drive than ever before. Playing for each other and having the district title in the back of their mind throughout the season is going to push them to work ever harder.