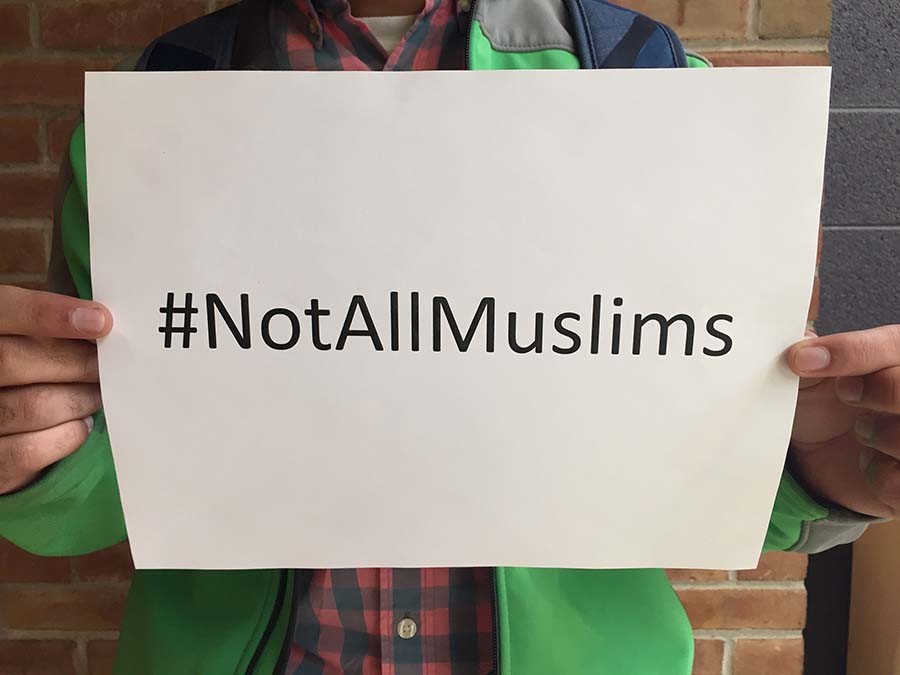 The world goes silent as CNN reports appear on television screens, bringing news of terrorist attacks in Paris. Memories of the 9/11 attacks that have long since been buried are now fresh in the minds of people around the world. Before the smoke has time to clear and facts are presented, world leaders start to point fingers at their go-to suspects: Muslim extremists.

These accusations, however, are backed with factual evidence. Multiple terrorist groups commit heinous crimes in the name of Islam, from al-Qaeda’s anti-American regime to ISIL’s goals of eradicating any non-Muslim. The people placing blame, however, fail to distinguish extremist beliefs from those practiced by the vast majority of Muslims who are peaceful practicers. The result is a constant paranoia regarding the beliefs and actions of Muslims: Islamophobia.

The word “Islam” derives from the Arabic language, translating to submission. Many interpret this as the reason for the apparent oppression of women in Islamic society when, in fact, its purpose serves to affirm a submission to Allah, the Arabic word for God. Allah is the same God that Judeo-Christians worship; the only difference is which messenger they believe to be the true prophet. While Muslims recognize Jesus as a messenger, they believe Muhammad to be the pure, true prophet. Muslims live by a book of rules and stories, the Qur’an, similar to the Bible, and follow five pillars by which to lead their lives: faith, prayer, charity, fasting, and pilgrimage to Mecca, the holiest city in Muslim culture.

The basic principles of the Islamic faith promote peace and respect to the same god that Jews and Christians worship. It is estimated that seven percent of the world’s Islamic population is related to some form of jihadist, or Muslims who act on their extremist beliefs, activity. This includes every messenger, conspirator and family member that has contact with an extremist. The other 93 percent, much like the world’s peaceful Jews, Christians and Hindus, just want to live and be well.

Recoiling from the Paris terrorist attacks, some Americans want to take precautionary action as Syrian refugees escape their war-ridden homes. One of the attackers is a confirmed Syrian migrant and many public figures are using the “10 bad peanuts ruin the entire bag” argument to prevent refugees from entering the country. These people- presidential candidates, governors, political commentators- are too blinded by their own ignorant fear and constant need to pander to public opinion to realize the deprivation of human decency they are instituting.

Syrians are desperately trying to escape their war-torn homes, so much so that they are willing to endure the 18 to 24 month process of becoming a registered refugee. In this time frame, refugees go through meticulous background checks to ensure they are free of any shady ties, including terrorism. Others who cannot wait that long are willing to risk their lives by boarding a crowded raft with nothing but the clothes on their backs to protect them at sea. Their religious affiliation should be the least of our leader’s worries. Anyone willing to put themselves in that vulnerable of a position is only concerned with the safety of themselves and their loved ones. Get one thing straight: allowing innocent victims to seek refuge in a free nation does not require a war on religion. If anything, public and governmental figures are forging a war on human rights.

Unfortunately, the ignorance doesn’t stop with international affairs. Leading presidential candidate, Donald Trump, has proposed the unthinkable: register all Muslims living in the United States and do not allow any more to enter. According to Mr. Trump, the only way to keep a country safe is to mirror the actions of a certain infamous dictator by labeling an innocent religious group. Replacing yellow Stars of David with a Muslim identification card and passing it off as “a precaution” diminishes the value of a person by solely defining them based on his religious beliefs. Politicians like Trump are driven by fear, not reason. Planned Parenthood centers are being terrorized by radical pro-life Christians, yet cries to control this small group of a large population are seldom heard. This is not a matter in which leaders can hand-pick their prejudice. All religions have a small and vocal minority that cast a dark shadow upon its entirety. People can either buy into it, or take it for what it’s worth: nothing but talk.

It is seen time and time again- people fear what they do not know. Nobody knows if or when ISIL will attack on American soil. Out of thousands of refugees, nobody knows for sure if one could be a terrorist in disguise. What we do know, however, is that this country’s foundation is based upon freedom and opportunity- the things being denied to those in situations out of their control. The  Muslim silent majority is waiting to be accepted into a safe environment, and what does America look like if its leaders are turning their backs on the world?