How Will the Democrats Survive? 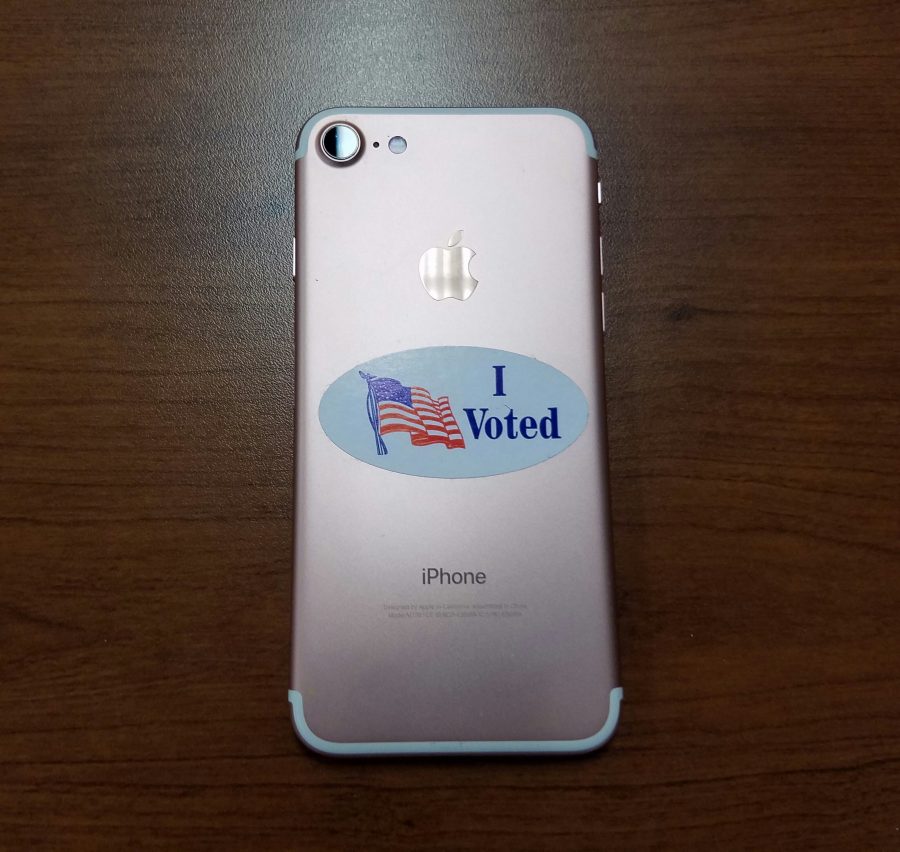 Senior Shelby Smith proudly displays her "I Voted" sticker on her phone.

We are often told that the next generation is the key to the future.  Between losing the legislative and the executive branch in the recent general election, Blue America is the weakest it has been in years. Consequently, members of the party are starting to call for change. Where did the Democrats go wrong, and where is the party headed now? Some emerging movements in America may hold the answer.

The last year and a half saw many puzzling events unfold in politics, and the Democratic primary elections were no exception. During the primary, alongside the card carrying Democrats Hillary Clinton and Bill O’Malley, stood the independent candidate Bernard “Bernie” Sanders. Sanders, who describes himself as a socialist, inspired millions to join his “revolutionary” campaign. His proposals appealed to vast swathes of Americans: workers who lost jobs to trade deals, immigrants seeking legal status, college students swamped with debt, and middle class families decimated by the banking crisis.

This political revolution, though ill-fated, defied traditional electoral wisdom. The Sanders campaign brought in demographics which were previously apathetic to the polls. Many independents even became registered Democrats to vote for him. Even after the revolution failed at the convention, with Sanders losing to Clinton, the spirit of change persisted. Some of his followers opted for Green Party candidate Jill Stein in the general. Shockingly, several blue states turned red come the presidential election. Stein, Sanders, and even Trump hold a few key traits in common, and these similarities may well shape the American Left.

Though they call themselves Democratic Socialists, Jill Stein and Bernie Sanders are similar in ideology to a European movement called Social Democracy. This is the guiding ideology of the “Nordic model” employed by countries such as Sweden, Denmark, and Finland. This ideology differs from the historic ideology of the Democratic Party, which combines social liberalism and liberal economic policy. Their social positions are roughly the same; old style liberals and the new social movement both promote the rights of women, religious minorities, Americans of color, and LGBTQ citizens. Social topics like this are rather controversial and as such they are all most people see of politics. Social Democrats are, therefore, often put under the same umbrella term “liberal” by political commentators.

Despite sharing the liberal view of equal rights, the new Democrats choose to prioritize economic equality. The Social Democratic movement puts labor first in its platform. Democrats from John F. Kennedy to Barack Obama took a middle class, business first strategy to economic change, trying to help lower class laborers from the top down. Creating jobs and prosperity has been their mantra. This was their intention when they aided failing banks and allowed free trade deals to help large corporations exploit poor countries. Today, however, while Wall Street delivers record profits to the wealthy, the poor continue to become poorer everywhere in America. The Social Democrats know that they cannot use business to help the working class. By raising the minimum wage, guaranteeing benefits, and securing employment, the social democratic movement would help the working class directly instead of helping large companies and expecting the working class to benefit.

This platform must be adopted in order for the DNC to survive the next decade’s elections. Their opponents, the Republicans, are presenting themselves as the party of workers. Right wing populism clearly outperforms left wing liberalism; in order for a leftist party to survive the coming era of politics, it must deliver its promises to the people sooner rather than later. If not, the effects of liberal economics might expand beyond jobs. If the party of the people continues to fail, there will be no one left to deliver its otherwise sterling social platform.

The Democrats cannot win equal rights for women, people of color, or LGBTQ Americans if they cannot even win an election. Desperation, not hatred, forced many working voters to hold their nose and vote for an openly bigoted candidate. This is how President Obama won two extremely popular terms in office; he went further to the left in his platform than other Democratic candidates.