Are Charity Week Incentives Asking Too much? 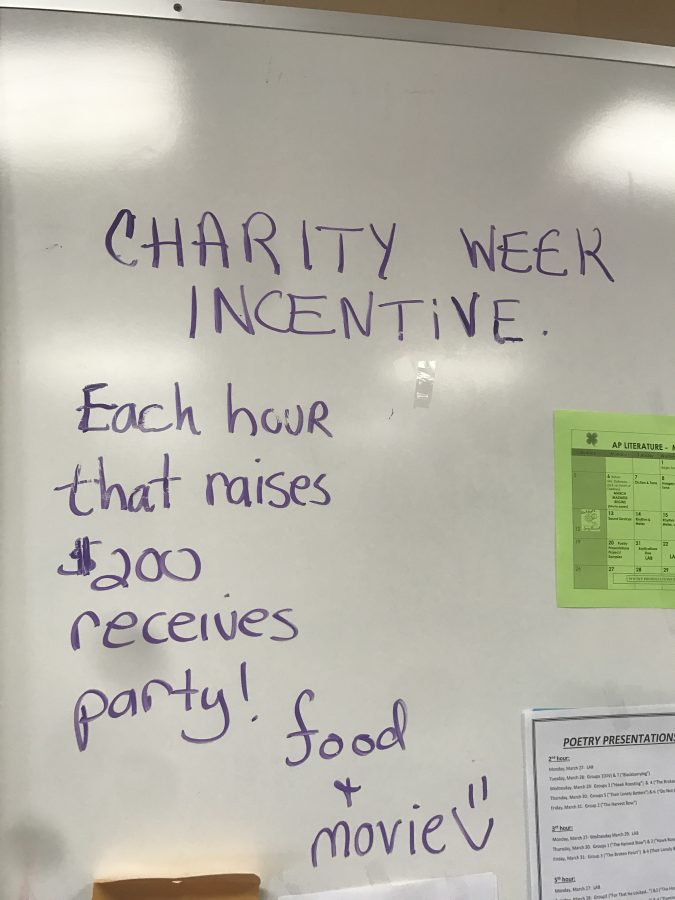 Teacher around the school offer students incentives during Charity Week, but when do these incentives go too far?

The Adams High School tradition of Charity Week is most definitely one that should continue to be an exciting and inspiring week for staff and students in the years to come. There is no doubt that this week is an excellent way to come together and raise money in support of a good cause.

For 2017, the school decided to support the Make a Wish Foundation with a set goal of raising $20,000. Though granting a sick child a wish is certainly an excellent way for students to spend their money, some people may question if some of this year’s, and past year’s incentives are asking too much or are unfair.

For most teachers, donation encouragements include the ability to drop a test, skip an assignment or project, use a notecard on a test, or even work with a partner on a difficult in-class task. Although these are positive charity allurements, the prices are what have some students feeling unsatisfied. One teacher, for example, charged $50 for an essay re-write, which is quite a bit of money for one student to pay. Nevertheless, this incentive motivated many students and raised an astounding number of donations.

But is this fair?  What about the student who does not have enough money to buy one of these incentives and his peers are paying for grades higher than the ones he has rightfully earned?

“I don’t like how expensive some of the incentives are because kids who do not work as hard are paying to raise their grades. Grades should be something that you earn,” said sophomore Isabella Martin.

In the past, students have even been encouraged to “buy” a bathroom pass! Ethical problems arise in this type of situation for students without change to spare. It is without a doubt absurd that kids cannot get anything from their locker or go to the restroom without making a donation, which is why teachers are no longer allowed to enforce this type of policy during Charity Week.

According to political scientist Dr. J. Tobin Grant who was interviewed by The New York Times, offering incentives for charitable donations is a controversial topic because of the differences in the incomes of Americans.

When asked about the issue, Grant states, “We tend to view such incentives as some form of voluntary trade. In fact, she says, they often indicate an imbalance of power, and thus raise ethical issues.” Nevertheless, some students have a harder time achieving high scores even when they try their best, so for some, these incentives are very beneficial.

Overall, it seems to depend on the individual and what they are able or willing to do to donate money for charity. While it is definitely a bit arbitrary to ask students to pay money in order to improve their grades, the motivation most students have to do well in school serves as an excellent stimulus for getting donations.