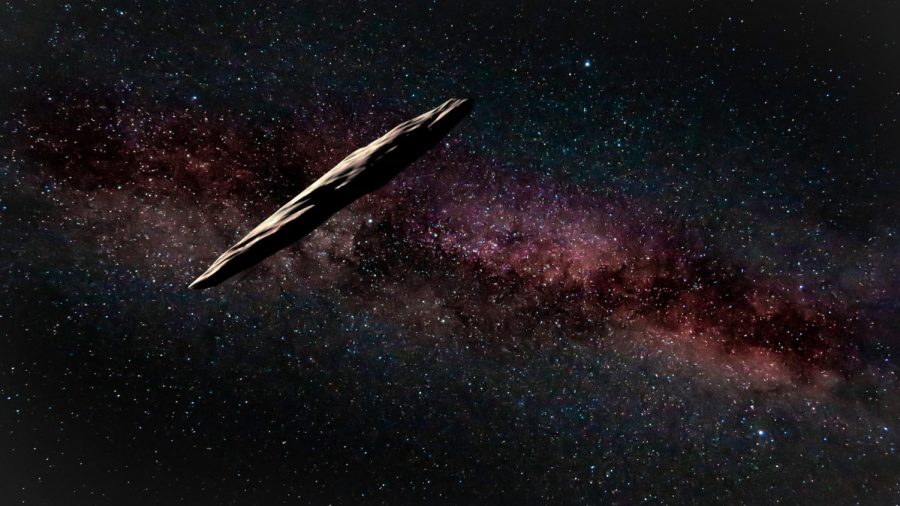 An artist's interpretation of Oumuamua; https://www.gemini.edu/node/12729

With the abundance of life on Earth, it is not hard to believe life could exist elsewhere too.

During October of 2017, an interstellar object known as Oumuamua was identified in the solar system. Described as cigar-shaped, the unusual space debris sparked curiosity within the science community. The object simply did not look like things previously found in the solar system.

“Since there are so many billions of planets that we have yet to discover, there’s a large chance that there is a planet that has conditions for life. I believe there might be some sort of single-celled organism out there at the very least,” said sophomore Zaina Qadri.

Two researchers at Harvard University, Shmuel Bialy and Abraham Loeb, have similar views to Qadri. In their paper for the Harvard Smithsonian Center for Astrophysics posted in early November, 2018, the two suggested that the object was a probe sent by an alien civilization to this solar system.

“Alternatively, a more exotic scenario is that Oumuamua may be a fully operational probe sent intentionally to Earth vicinity by an alien civilization,” said Bialy and Loeb.

Though no radio signals were detected coming from it, the object did not follow normal orbit patterns. As it moved away from the sun, Oumuamua accelerated. Oumuamua was also estimated to be around a millimeter thick, but very wide. This suggests that the object was more than just a space rock.

“Considering an artificial origin, one possibility is that Oumuamua is a lightsail, floating in interstellar space as a debris from an advanced technological equipment…The lightsail technology might be abundantly used for transportation of cargo between planets,” said Bialy and Loeb.

Other scientists reason that Oumuamua was an odd rock. As it is too late to investigate the object with earthy-mechanics, no one will ever know what Oumuamua really was. Perhaps something else will come back and land on Earth, perhaps nothing will come of it. This is no apocalypse, but who knows what could be in store?