Was it a Beauty or a Beast? 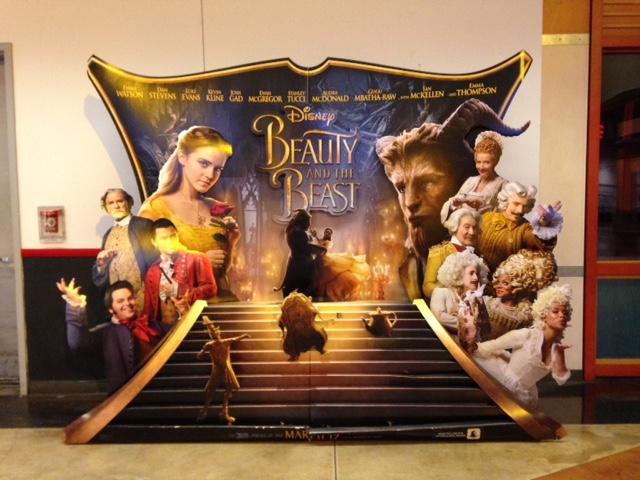 AMC promotes Beauty and the Beast with life-size display.

Disney’s most recent trend is transforming the classic animated movies into a live-action film. Fans have already been introduced to Alice in Wonderland, Cinderella, Maleficent, and The Jungle Book. Disney’s latest release is Beauty and the Beast, starring fan-favorite actress Emma Watson as Belle and the captivating Dan Stevens as the Beast.

A tale which is truly “as old as time”, Disney does the classic justice, and closely follows the original plot. A few new details and songs are added, which do nothing but add to the beloved tale.

The story begins the same, with the disguised enchantress begging for shelter at the castle. The prince, believing the woman’s looks to be laughable, promptly tells her to leave. As the prince turns away the sorceress, she transforms him into the Beast.

In addition, a spell is cast on the castle and the servants become household objects. Like the original, the Beast is given a wilting rose. If the Beast does not break the curse by the time the last petal falls, his transformation will become permanent.

Years later, the handsome, yet arrogant, Gaston (Luke Evans) lusts after the town beauty, who is known for her behavioral oddities . The beauty, Belle, and her father, Maurice (Kevin Kline), live as inventors in the small town of Villeneuve.

One day, Maurice sets off to sell his music box, but somewhere along the way, he finds himself lost and wandering into the Beast’s castle. During his time on the Beast’s property, the Beast captures and imprisons Maurice. When her father’s horse returns without him, Belle rushes off to find Maurice.

Following the original story, Belle sacrifices herself to save her father. As Belle spends time as the Beast’s prisoner, she finds herself making the most unlikely friends, and finding good within the Beast.

The film truly lives up to expectations. The details in the castle, village, clothing, etc. were all gorgeously realized, giving the movie a genuine feel of magic.The real magic, however, is through the performance of the actors, who truly brought the tale to life.

Watson is the perfect Belle, displaying spectacular brilliance as well as courage and grace. Her renditions of both the classic and new songs are full of exuberance. Watson’s voice is not strong or powerful, but clear and bright, and she delivers an amazing singing performance.

Stevens is completely transformed into a convincing Beast. The actor does a magnificent job of showing the gentle side of a feared creature. Stevens performance of “Evermore” is moving, and the Beast’s love for Belle becomes even more evident. The audience finds themselves falling in love with the Beast as well as Belle.

A Disney villain favorite is Gaston, and Evans does not fall short. Evans’ performance as Gaston is delightfully pompous and narcissistic, and is wonderfully shown in his ode to himself, “Gaston.”

The film was positively received by most, however, there is controversy surrounding the character LeFou (Josh Gad), Gaston’s faithful lackey. LeFou is Disney’s first openly gay character, creating quite a stigma, however, the scene implying Lefou’s sexuality is brief and rather harmless. The fact that LeFou is gay does not and should not take away from the rest of the film.

Overall, Disney does an amazing job producing Beauty and the Beast. Once again, Disney captures the magic in the hearts of all. Be sure to visit the local theater to experience a revisit to childhood. Beauty and the Beast is currently playing at Emagine and AMC Theaters.