The Rise of Skywalker Movie Review 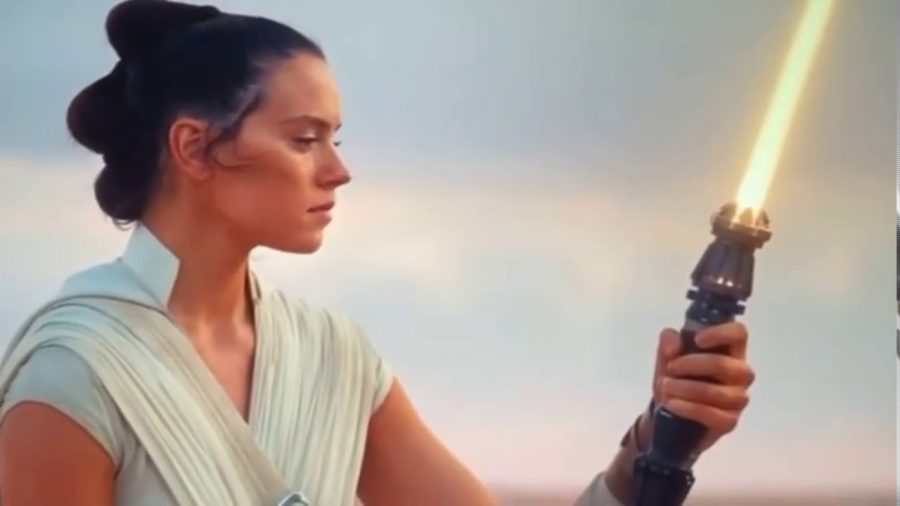 Star Wars: The Rise of Skywalker left many fans with mixed opinions on the conclusion of the Skywalker saga.

The Rise of Skywalker seemed very rushed. After The Last Jedi, fans were unsure how director JJ Abrams would fix Rian Johnson’s implementations on episode VIII from his original storyboard.

The movie starts with Kylo Ren searching for Emperor Palpatine after finding out he was alive, then cuts to Rey training at the Resistance base. Rey is being trained by General Leia after the death of Luke Skywalker. Rey, Finn, Poe, Chewbacca, BB-8, R2-D2, and C-3PO journey across the galaxy on a journey to find the Emperor. It is revealed that Rey is Palpatine’s granddaughter. Furthermore, Palpatine killed Rey’s parents so Rey will not know  her past, and then try to take over the Sith as their new leader. Kylo Ren has a redemption arc as he turns back to the light side, as Ben Solo again and helps Rey during the final battle. The Resistance is fighting the Sith in the sky with the help of all the fighters in the galaxy at the brink of defeat, which gave off an Avengers: Endgame vibe. Meanwhile, Rey defeats Palpatine and dies in the arms of Ben, but is soon resurrected by Ben and they kiss, which left fans with many questions. Ben soon dies and becomes one with the force. As you can tell, there is a lot going on.

At the end of the movie, Rey buries Luke and Leia’s lightsabers on Tatooine and showcases her new yellow lightsaber. She adopts the Skywalker name and the movie ends. The movie tries to add old memories and bring back returning cast members, but fails to provide a well written plot to wrap up the saga.

“The Rise of Skywalker is a fast paced, action movie. The CGI and other effects were amazing, but the content was iffy. Rey adopting the Skywalker name and kissing Ben at the end was dumb. Force-healing is also a cop out to help the plot. Overall, the movie was not bad and I would recommend it, ” said senior Dylan Blackmer.

The visuals look amazing. The amount of detail put in the final battle is the big selling point of this movie. The fight scenes, lightsabers, fighter jets, and locations all look great. During a flashback scene with Luke training Leia to become a Jedi, the two lift up their masks and reveal a CGI version of a young Luke and Leia. Luke’s CGI looks amazing and is very reminiscent of his younger age, while Leia looks like she came out of a Playstation 2 game. Besides the rough CGI in scenes involving Leia, overall, Disney knows how to generate the best CGI for their movies, especially the Star Wars franchise

Most of the characters in the movie are forgettable, except those where present since the start of the sequel trilogy. The original cast tries to carry the movie to please audiences, but is handled with little care. There are too many plot holes: how does Rey receive her yellow lightsaber? Is Finn force sensitive? How did Palpatine return? Furthermore, The Knights of Ren (Kylo Ren’s guards) were underutilized with barely any screen time. Their origins in the lore are very interesting, but are never touched up in the movie.

“In my opinion the main characters made a lasting impact on the fans. Since this was the last movie of the Skywalker saga, they had to wrap up a bunch of action into one movie. I would imagine this to be pretty difficult, but they did a good job for the amount they had to deal with,” said senior Carson Duff.

The Rise of Skywalker left many fans unhappy with the conclusion of the Skywalker Saga. The movie felt very rushed by moving from one location to another in only a few minutes. Most of the characters are forgettable and have no strong connection towards the audience. Hopefully, Disney will learn from their mistakes and create more future Star Wars films.