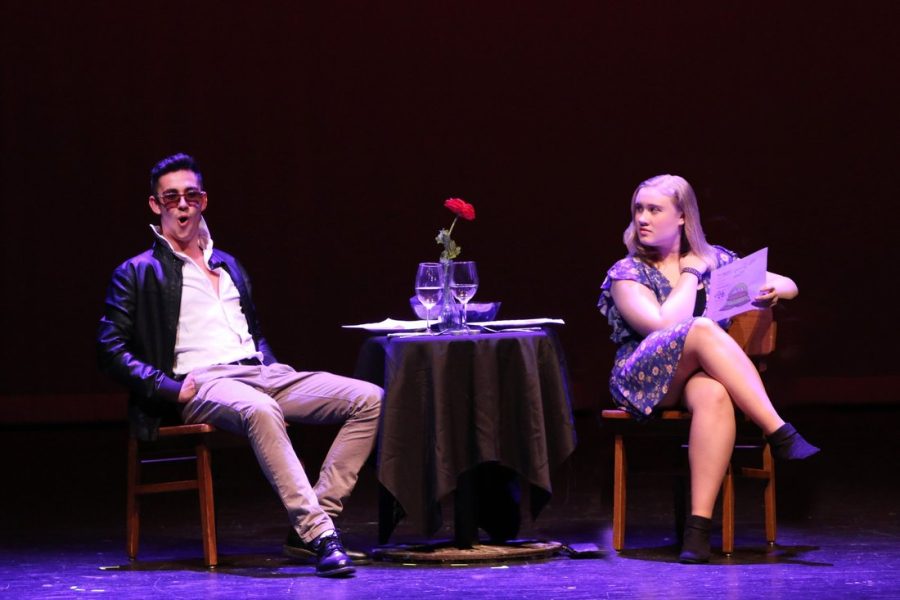 A blip back in time, a former D-Theater production of this year's Check Please.

After a trying two years of coughing, containment, and complete chaos, the Adams High School Theater Department is back in business. With a successful fall play, She Kills Monsters, and spring musical, The Drowsy Chaperone, post-musical D-Theater, or Dessert Theater, is booming back to life as well.

This year’s D-Theater bonanza will take place on Friday, April 29th, in the AHS auditorium and is open to anyone interested in attending. The main events include three, one-act shows, Check Please, Ten Ways to Survive the Zombie Apocalypse, and The Importance of Being Urgent.

Check Please by Jonathan Rand follows the comedic story of two people and a whole mess of funky dates standing between them and, what they hope will be, love.

Ten Ways to Survive the Zombie Apocalypse by Don Zolidis is just as it sounds, a comedic tutorial, with examples, about surviving a zombie apocalypse.

Last, but more certainly not least, The Importance Being Urgent, a student adaption from Oscar Wilde’s The Importance of Being Ernest, is essentially a wacky and lovable spoof off of the original, generally following the primary plot lines.

D-Theater is a one-night-only series of performances ranging from simple talent acts to whole one-act performances. As in the past, all the shows are student-run and directed. Because of the smaller nature, it usually involves very little tech work. The included technical aspects in these shows are predominantly costumes and props work, typically involving very few set pieces.

Between the three shows, there are roughly 40 actors and 6 directors making these fantastically funny skits happen.

“I generally love the community that theater creates and D-Theater having a smaller cast allows you to get to know everyone better,” said an anonymous actor. “I wanted to be more involved in theater and it sounded like fun.”

“I joined D-Theater because I have siblings and friends in theater, and I wanted to audition for a play without all the stress of the full fall play,” said Leah Palmer. This is her first time acting after working as a technician in the past.

The Adams High School, complete theatrical process is built on oodles of cooperation, late nights, and loads of leadership. It is quite extraordinary that Adams High School has these opportunities to give students the chance to take initiative, have fun, and make amazing memories along the way.