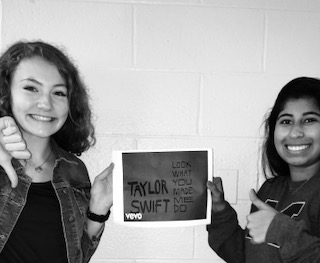 Junior Claire Sanford and senior Nadia Khan rate “Look What You Made Me Do".

Swift and West’s ongoing feud dates back to 2009, after he interrupted Taylor during her acceptance speech at the Video Music Awards.

As if this fiasco was not enough to spark a feud between the two celebrities, West and Swift had another falling out later in 2016 about an explicit lyric in Kanye’s song “Famous”.

“Look What You Made Me Do” has lyrics like “Don’t like your tilted stage,” referencing West’s tilted stage during his Saint Pablo Tour. Another lyric that is throwing shade at the rapper is, “I’m sorry, the old Taylor can’t come to the phone right now,” touching on the controversy between Swift and West in 2016, where West publicly exploited Swift by releasing a call between the two. However, Swift is speaking about how she approves of West putting the explicit lyric in the song.

Swift’s song has attracted a lot of attention at Adams as well. For students that are interested in her genre of music, her switch from country, to pop, and now to punk rock came as a shock to many fans.

While some cannot stand this new jam, there also people who like it. After the original shock wore off, “Look What You Made Me Do” soared to the top on charts and became number one on iTunes.

“I didn’t like it at first, but then once I listened to it more, it’s really catchy” said junior Kaitlyn Petrosky.

Swift also reeled in the attention of Ellen Degeneres. Degeneres created a spoof of the “Look What You Made Me Do” music video. Throughout the remake, it features Ellen dressed up in the same outfits as Swift, poking fun at the lyrics.

Spinoffs like Degeneres’ video have shone new light upon the song, causing it to become an internet sensation. Whether music fans find the song appealing or not, they can at least find humour in the way the tune is being used in other forms.

Overall, Swift’s sudden musical comeback, although somewhat controversial, has triggered a hot new topic in pop culture. For anyone following Swift’s future aspirations, ask: what the world will make her do next?