Fantastic Beasts and Where to Watch it 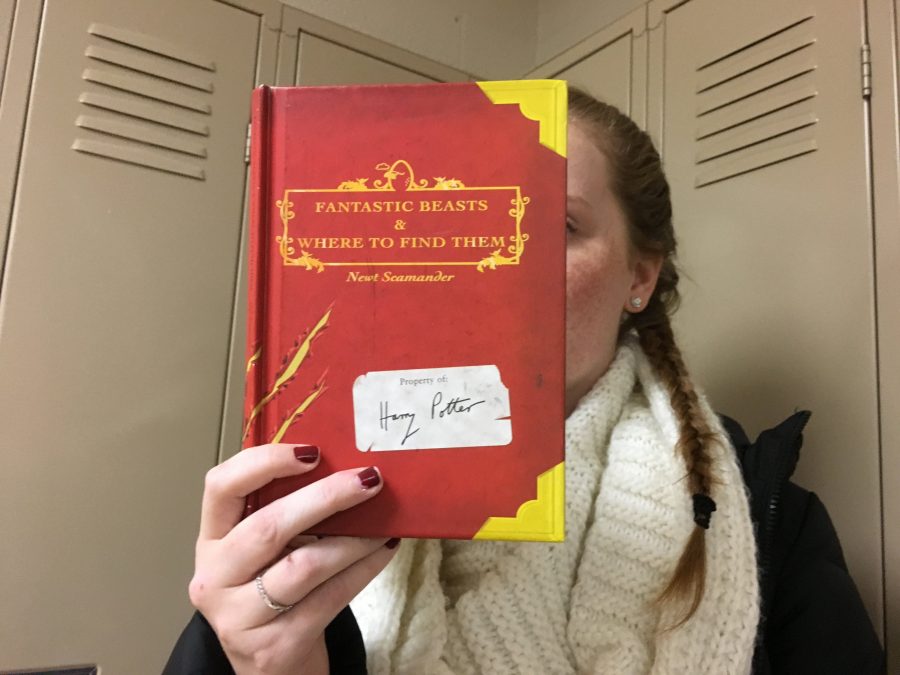 Senior Shelby Smith reads the original Fantastic Beasts book which served as the base for the movie.

No, this is not a dream: the brilliant and transcendent J. K. Rowling has actually graced the world with yet another masterpiece. Fantastic Beasts and Where to Find Them hit screens on November 18, fueling the constant, undying love Harry Potter fans universally posses.

Earlier in 2016, Rowling released the script of Harry Potter and The Cursed Child, a play which takes place 19 years after the end of the Harry Potter series.  It was the first fans had seen from her in awhile, at least where Mr. Potter is concerned. Written in conjunction with two other playwrights, Rowling’s attempt at theater was ill-received by many Potterheads. This time around though, with Fantastic Beasts, Rowling takes the reins and writes her first screenplay. Unlike the eight Harry Potter movies, in which she contributed only her books and ideas, for Fantastic Beasts, she wrote both the dialogue and action. David Yates, the director of all the previous Harry Potter movies, returned to work hand in hand with Rowling for Fantastic Beasts and Where to Find Them.

Based on a textbook used in Hogwarts, Fantastic Beast and Where to Find Them is the story of its author, Newt Scamander, and his adventures writing the book itself.  Rowling published the textbook in 2001 for Harry Potter fans to enjoy along with Quidditch throughout the Ages, another Hogwarts textbook.

Eddie Redmayne plays the role of Newt Scamander, an ex-Hufflepuff and magizoologist, who ventures into 1920s New York City with a case full of banned magical creatures. After a hapless encounter with a no-maj, the American term for muggles (non-magical folk), Scamander’s beasts are set loose into the unwitting city.  Beginning simply with a lively hunt for his beasts, Scamander winds up encountering the local magical government while a mysterious creature wreaks havoc on New York.  Scamander ends up with much more than he bargained for when he lands in America.

Set nearly sixty years before Harry Potter’s birth, and back when the beloved Albus Dumbledore was still a transfiguration professor, Fantastic Beast and Where to Find Them is a prequel to the Harry Potter series. This time, however, instead of laying waste to the rolling hills of the U.K., Rowling sets her characters loose in America.  Along with an entirely new system of magical government, including a black female wizard president, fans are gifted with a new magical school, Ilvermorny.  With stricter rules involving no-majs, the American Wizarding world is not something Harry Potter fans have ever seen before.

Despite the American rules involving no-majs, Scamander teams up with an unsuspecting bystander, Dan Fogler plays Jacob Kowalski, while trying to wrangle his beasts back into his case. This allows fans the rare opportunity of seeing a non-magical protagonist involved with the zany magical life of wizards. Kowalski’s reaction to the amazing world of magic is similar to fans’ reactions, making  him relatable and extremely lovable.

Scamander, hailing from across the pond, is unaware of the authoritarian rules of the local government and easily gets himself and those around him into trouble. Even once notified and warned of the rules, he pays little attention to them; his only concern is his beasts.

Part of what makes this movie stunning is Scamander’s dedication to the beasts he hosts inside of his case. His livelihood involves traveling the world and documenting magical creatures for the book he is writing.  The textbook’s purpose is to inform the wizarding community about magical beasts and persuade them to change their brutal ways  towards them and treasure and love them instead of hunting and killing them.

Having rescued most of his beasts while traveling around the world, Scamander forms a deep attachment to every single one of them. In some cases, he even refers to himself as their “mama”. It is heartwarming and adorable to see his interaction with the array of creatures. The quirky wizard’s love is matched by the beast’s own devotion for him.

From the title, it is easy to tell that magical creatures dominate the movie. Fans are not strangers to some of the creatures, having read about them in previous books by Rowling, but there is a whole suitcase full of undiscovered ones. Every single beast, new or old, is as equally fascinating and entertaining as the next, and the special effects of the movie literally bring them to life. Between that and their unique personalities, the audience is enthralled by otherworldly creatures, who are different from one another in every way. One thing the creatures have in common, however, is their love for Scamander.

This movie is only the beginning of Scamander’s adventures. Though the movie came to a satisfying conclusion, easily making it an acceptable standalone movie, Rowling plans to do four more movies featuring Scamander and his story. The sequel is already scheduled to hit theaters in November 2018 and the fifth and final movie will be released in 2024. Similar to the Harry Potter franchise, Fantastic Beasts and Where to Find Them sequels will keep the “Fantastic Beasts and” followed by a subhead for the second part of the title. The subhead will change based on the plot of each movie.

Fantastic Beasts and Where to Find Them is currently being shown at AMC Theaters and Emagine.

Fans look forward to many more years of Newt Scamander frenzy and fun!