Does Pokemon Brilliant Diamond and Shining Pearl Live Up to Their Names? 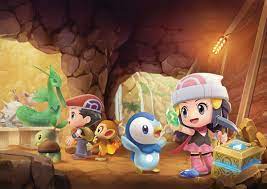 Art of the Grand Underground.

Pokemon has had many games released over the years, and almost every single one has been a smash hit. Pokemon Diamond and Pearl originally came out on September 28th 2006, along with the new 4th generation of Pokemon. Diamond and Pearl added tons of new features as well, including online multiplayer.

Diamond and Pearls “Sequel”, Pokemon platinum, released on September 13th 2008 and improved many of the gameplay elements, fixed bugs, and added new features. Platinum is considered one of the best Pokemon games to date.

Recently a full remake of diamond and pearl, called Brilliant Diamond and Shining Pearl has been released making many fans new and old excited to go back again.

The story starts with the main character and they’re rival preparing to become Pokemon trainers and while being attacked, they had to choose their first Pokemon, Chimchar, Turtwig or Piplup. As the story progresses the hero catches more Pokemon, collects gym badges, and meets new friends. All while dealing with the evil “team galactic”, that is trying to create a “new world”.

The gameplay feels very reminiscent to the older Pokemon games, especially ones released for the Gameboy. The characters in BD&SP(Brilliant Diamond & Shinning Pearl) are now 3D, and have more fluent movement.

Combat in this game is turn based, just like all other games that came before, it feels slow but overall very welcoming to players returning to the series, and also good for new players who are used to the newer games like Pokemon Sword and Shield.

Now the elephant in the room, what about the Pokemon themselves?  The fourth generation of Pokemon has a very great selection of Pokemon, with well made, cool designs, something many of the games that came after D&P(Diamond and Pearl) somewhat lacked.

However, one small problem is the type of Pokemon, each has a corresponding element with it, but there are some Pokemon types that are very rare compared to others.  This is a problem because if players want a diverse team they would have to go on a very long hunt or unlock national Pokemon from other games, which is a difficult process.

Though it is a full fledged remake, Brilliant Diamond and Shining Pearl still have some new features to offer.

The Grand Underground lets player explore under the map, and is by far one of the best things these games have to offer. Pokemon that originally couldn’t be obtained in the originals, now appear in hideaways. The Grand Underground feels like a mix of Pokemon Lets Go (remake of the first games) and Sword and Shields wild area because of how Pokemon appear and react, making the Pokemon feel more alive; a contrast to previous entries where hunting Pokemon was equivalent to walking into an minefield.

Online multiplayer has gotten a upgrade as well. Other than battling with friends online, players can also invite others into their games. The Grand Underground lets players come together, search for items, trade with each other and hunt rare shiny Pokemon, which are just Pokemon with different colors than usual.

Overall, Brilliant Diamond and Shining Pearl is average. The story has a very slow start, and once it starts picking up it still remains lackluster. Comparing the features and all the other content other remakes like Let’s Go, or Omega ruby/ Alpha sapphire (remakes of the 3rd generation) had, make BD&SP feel like the developers put in less effort.

But there is still a good amount of things to be loved about BD&SP. The gameplay is a mix of nostalgia and modern elements to it. The Grand Underground is a great feature that makes people stay with the game, even if they already finished the story.

Brilliant Diamond and Shining Pearl are still somewhat enjoyable, and are great to play with friends and kill time. If the developers put more heart and effort into the game, maybe it would be a better experience.