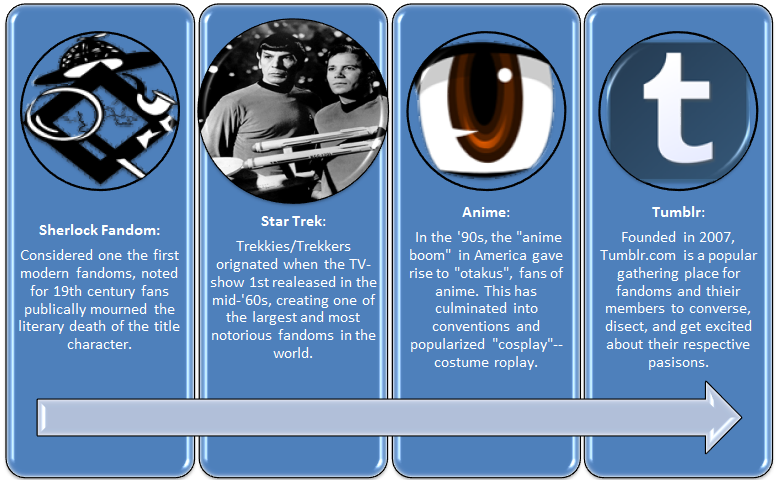 Some of the most popular fandoms today are shown above.

Fangirls squeal in the hallways, fanboys shout out-of-context phrases into the sky, sports fans of all sorts yell obscenities to the unfeeling television screen; they all represent a word, and that word is “fandom”.

This word is seen all over the Internet and mentioned in normal conversations. Everywhere one turns, the word pops up. What exactly does “fandom” mean? Is it a new classification of something that has been around, perhaps, longer than we are aware? What even is a fandom, and why do they seem to be everywhere?

The word “fandom” is described as “the state or attitude of being a fan”. Other definitions like to take this definition further, specifying that fandoms come in groups, and usually pertain to a single subject.  These subjects can take any and all forms.

For example, one of the earliest fandoms was referred to as “railfans”—people who were/are fans of railroads and specific types of trains.

Now, there are fandoms for TV-shows, movies, celebrities, sports, books, video games, the list goes on. In other words, if it exists, there’s a fandom for it. If more than one person loves a subject, those people are technically a fandom. However, an unspoken rule seems to be that a fandom consists of people who are conscious of other people who like the same subject, and a fan is a single person who likes a subject.

All these definitions are fine, but what exactly do fandoms do? Like all groups, they gather. They assemble by the thousands for conventions or events, like Comic-Con or sports tournaments. However, in the time in-between work and the next convention, most fandoms meet on the internet. There are whole websites dedicated to the interactions between fandoms.

A big example of this is Tumblr.com, where posts are created and “re-blogged” based on likes and dislikes of certain aspects of a fandom. “Alliances” between fandoms are even created on this site, such as the large and still-growing “Superwholock” fandom alliance, consisting of fans of the TV-shows Supernatural, Doctor Who, and Sherlock.

Fandoms for anything imaginable are flooding the Internet and chatting about their passions in between classes. Thankfully it doesn’t go further than that, right? Nope! Fandoms are everywhere, and they can influence the world around us, which isn’t necessarily a bad thing. Sports fandoms affect the market with stores and stadiums dedicated to their passion of athletics and, in return, help the economy and marketplace thrive.

Comic book fandoms show their appreciation for the arts, and video game fandoms help independent video game creators get their studios off the ground.

Producers are rebooting and reviving old movies by the dozens every year, and most are fans of the original works; they usually make these because they loved the original works and want newer generations excited for them. Fandoms are everywhere, helping the public thrive in their own manic ways.

Fandoms are taking over the world and have been for some time. All-encompassing and all-inclusive, fandoms aren’t going anywhere, and they are growing fast.