A Quick Recap of The Skywalker Saga 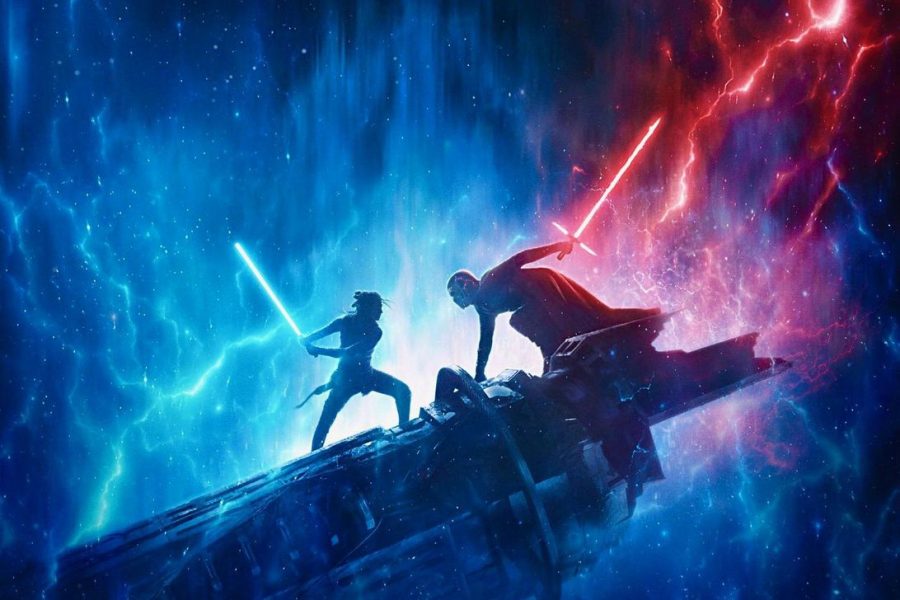 Star Wars is finally concluding their 42 year saga with The Rise of Skywalker.

Star Wars: The Rise of Skywalker will conclude The Skywalker saga that started with Anakin Skywalker’s journey in the prequels, to Luke’s training in the original trilogy, and Rey’s awakening of the force in the sequels. After the fans’ backlash on The Last Jedi, they are both nervous and excited to see how director JJ. Abrams ties up loose ends in the new movie. Here is a short recap of the saga to remember before going to see the final film.

Episode I: The Phantom Menace showcases a young Obi-Wan Kenobi and his master Qui-Gon Jinn’s journey across the galaxy as they stumble upon Anakin Skywalker as a child on Tatooine. Qui-Gon believes Anakin is the chosen one who will bring balance to the force. During their journey, the crew encounter Darth Maul, who was sent by the Emperor to assassinate Queen Amidala, or otherwise known as Padme. In the final battle, Obi-Wan and Qui-Gon fought Maul, but Qui-Gon died due to a one-on-one lightsaber duel while Obi-Wan was guarded behind a barrier. Kenobi defeats Maul and takes Anakin in as his apprentice, thus beginning The Skywalker Saga.

“The Phantom Menace is probably the most important movie in the saga because it shows Anakin’s origin and why he’s the chosen one in the prophecy. It also shows Padme and Anakin’s origin story which is what gives birth to Darth Vader, Luke, and Leia Skywalker,” said freshman Eduardo Rengifo.

Episode II: Attack of the Clones takes a ten year time jump towards a young adult Anakin and more experienced Obi-Wan. The Galactic Republic is up against a Separatist movement, and Padme is now a senator and votes to create an army of clones to protect the Jedi. Obi-Wan soon discovers the production of clones that has been active for years. Meanwhile, Anakin and Padme start to fall in love. Anakin is having nightmares of his mother and travels to his home planet, Tatooine. The Tusken Raiders capture Anakin’s mother, which eventually leads to Anakin watching his mother die in his arms. Anakin kills all the Tusken Raiders, along with other men, women, and children. This is a key moment towards Anakin’s journey to the dark side.

Episode III: Revenge of the Sith concludes the prequel trilogy as Anakin and the Empire rise to power. Anakin finds out Padme is pregnant and tries to keep it a secret from the Jedi Council. Anakin discovers Palpatine is the mastermind behind the Separatist plan and the Sith Lord, Darth Sidious, which leads to Anakin becoming Darth Vader. Palpatine executes Order 66 which programs the clones to kill all the Jedi. Obi-Wan is sent to stop Anakin, and ultimately defeats him after their emotional duel of a failed teacher and student. Padme undergoes and dies during childbirth, with the introduction of Luke and Leia Skywalker. Raged after Anakin finds out the death of Padme, Anakin (Now known as Darth Vader) and Sidious set out to rule the galaxy.

Episode IV, A New Hope introduces the world to Star Wars as the first original movie in the saga. Princess Leia is held hostage by The Imperial Forces, which leads to Luke Skywalker, Ben Kenobi (Obi-Wan), Han Solo, Chewbacca, C-3PO, and R2-D2 to journey across the galaxy to save Leia. During the rescue mission, Darth Vader battles Kenobi and defeats him, leaving Luke helpless with Jedi training. The crew joins the Resistance with Leia in an effort to destroy the Death Star, which is capable of destroying planets. The Resistance destroys the Death Star and continues to bring freedom to the galaxy.

Episode V: The Empire Strikes Back highlights the Empire’s revenge on the Resistance and continues Luke’s training. The crew is on the planet Hoth with the objective of taking down the Empire base. Leia, Han, and the rest of the crew escape Hoth, while Luke and R2-D2 travel to the planet Dagobah in search of Master Yoda, who is believed to be a Jedi Master and can help Luke train. Han and the crew are captured by Darth Vader and are taken hostage by the Empire. After hearing the bad news, Luke sets off to rescue his friends. He battles Darth Vader and finds out Vader is his father. The movie ends with a huge cliffhanger, leaving fans anxious for the final film in the trilogy.

Episode VI: Return of the Jedi, is the final episode in the original trilogy. Luke continues his training with Yoda on Dagobah and sets off to save his friends from Jabba The Hutt. Luke saves his friends and sets off to find his father, Darth Vader, to bring him to the light side of the force. The final battle takes place on the Forest Moon of Endor, home of the Ewoks, where the Resistance hopes to finish off the Empire. Yoda confirms Vader is Luke’s father and passes away, which prompts Luke to be purposely captured by the Empire so he can talk to his father. On the damaged Death Star, Luke meets Emperor Palpatine, and battles his father. Luke defeats Vader, but is struck by lightning and is on the verge of death. A change of events occur as Vader throws Palpatine down a long hatch and kills him. Consequently, Vader died from the lightning caused by Palpatine and Luke has one final conversation with his father. The crew celebrates the fall of the Empire on Endor which concludes the original trilogy.

Episode VII: The Force Awakens is the first episode in the sequel trilogy. The movie introduces Rey, who is a scavenger on the planet Jakku, and Finn, who is a rebel stormtrooper. Finn finds his way out of the First Order by escaping with Po Dameron to Jakku in search for BB-8, who has a map of the whereabouts of Luke Skywalker. Rey and Finn join forces to stop the First Order, led by Kylo Ren. Kylo Ren and his First Order army set off to rule the galaxy and finish what Darth Vader started on Starkiller Base. Rey and Finn meet Han Solo, Leia, Chewbacca, C3-PO, and the Resistance to try and formulate a plan to destroy Starkiller Base and find Luke Skywalker, who is in hiding. On the base, Kylo Ren encounters his father, Han Solo, and kills him to further his plan. Outraged, Rey and Finn fight Kylo, leaving Finn injured. Unexpectedly, Rey uses the force to grab Anakin’s original blue lightsaber and duels with Kylo. Rey defeats Kylo and escapes to find Luke Skywalker’s location on the hidden map.

Episode VIII: The Last Jedi continues Rey’s journey to become a Jedi. The Resistance is under jeopardy by the First Order due to the mistakes of expert pilot, Poe Dameron. Luke resists Rey’s temptation to train because Rey instantly went to the dark side of the force while meditating. Finn and his new friend Rose, set off on a journey to find fuel for the ships. They are captured by the First Order and are on the verge of death. Meanwhile, Supreme Leader Snoke has been bridging Rey and Kylo’s minds together. Rey learns that Luke tried to kill Kylo while he was his student. After Rey learns about this tragedy, she is captured but is saved by Kylo after he killed Snoke by surprise. Afterwards, the two broke Anakin’s lightsaber and the First Order ships were destroyed by a sacrifice from the Admiral. Finn and Rose flee to the planet Crait, where the Resistance escapes off to. Luke fights Kylo as a way to create a diversion for the Resistance to flee, ending with Luke Skywalker sacrificing his life to save everyone.

“Star Wars was one of the first non kids movie I remember watching. I would always get so excited to go to my grandparents’ house because I knew they would let me watch movies that my parents wouldn’t. For me, Star Wars laid the foundation of what a good movie showcases, and it still does today,” said senior Chaz Foor.

Over the 42 year culmination of Star Wars films, it continues to strive and create new memories for the future generations. Star Wars: The Rise of Skywalker will be the final addition to the new trilogy of Star Wars Films. The movie has a lot of questions to answer: Who are Rey’s parents? How is Palpatine returning? What will Kylo do? After the negative response from Episode VIII, fans just want a good final episode to the trilogy, and for major questions to finally be answered. Star Wars: The Rise Of Skywalker releases in theaters on December 20th, 2019.