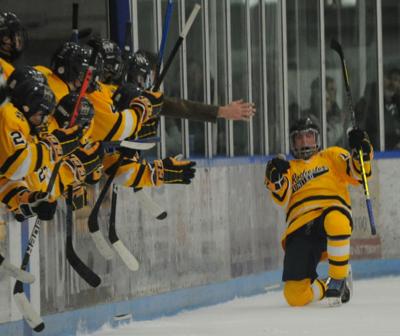 Saturday, February 15th, Stoney Creek hockey was celebrating its seniors for the final home game against Rochester United hockey (RU), but RU had other plans for the Cougars.

“Stoney Creek is always a massive game. Our team has been on a win streak lately, and we wanted to carry that energy into this game. We didn’t want their senior night to be a memorable one,” said Adams senior Matt Kanaras.

“We didn’t play our hardest the first period. We were sloppy and didn’t finish some easy ones. We knew we’d be in trouble if we didn’t find our rhythm soon,” said RHS senior Jack Myers.

The third period was a nail biter, with the Cougars in desperate need of a goal to tie the game. They skated the puck up the ice as quickly as possible for a last effort, but RU goalie Caleb Godlewski did not let in a goal for the entire third period.

Once again Rochester United beat Stoney Creek…for the second time this season, with a score of 3-2.